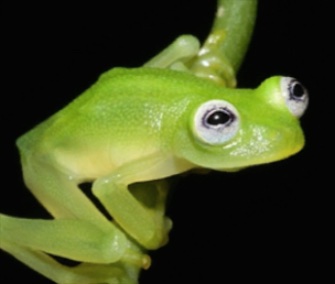 A newly discovered frog species is drawing lots of attention because of its resemblance to an old favorite: Jim Henson’s Kermit the Frog. A team from the Costa Rican Amphibian Research Center has found six specimens of a new translucent frog in the Talamanca Mountains. The discovery brings the numbers of glass frogs living in Costa Rica to 14, researchers said. The new species, Hyalinobatrachium dianae, is named for lead researcher Brian Kubicki’s mother — but he doesn’t have a problem with the comparisons to Kermit. "I think it is great that this species is getting so much attention around the world,” he said. “Hopefully this will help increase the awareness of the incredible amphibians found in Costa Rica and the need to continue studying them and conserve their vital habitats.” The species is described in the journal Zootaxa. — Watch it at CBS News