Our 6 Favorite Animal Rescue Stories of 2016

They lived through very different ordeals, including being trapped in a well, swimming desperately for help and enduring the rubble of a devastating earthquake. But as we put together a list of our favorite rescued animals from 2016, we noticed one thread they each have in common: They’re all amazing stories of survival.

We’re recounting their tales — and filling you in on a few updates — below.

If it hadn’t been for Amtrak Police Officer Kevin McMullen, it’s unlikely “Miracle” Molly would have made it. McMullen got a call from dispatchers in January saying engineers had spotted a dog in the Baltimore train tunnel system. McMullen tracked her down just in time. The mini Pit Bull had lost a hind leg and more than half of her blood. The officer rushed her to the BARCS shelter, where she had lifesaving surgery. When he visited her a week later, Molly clearly remembered her hero and smothered him with grateful kisses. Despite already having three other dogs at home, McMullen’s girlfriend, Claire, recognized their strong bond, and they added Molly to their family. In an update last month that the shelter shared on Facebook, Claire said that Molly and McMullen now visit schools to teach children how to safely interact with dogs. — Read it from BARCS Baltimore via Facebook 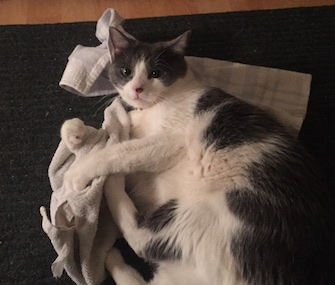 Courtesy Denise Vhalos
Splash rests happily in her rescuer's home, where she's working on warming up to her new brother and sister.

Denise Vhalos was out for a ride on a pontoon boat in an Arizona lake with her boyfriend in October when they were approached by two people on WaveRunners — who’d found a cat in the water. Vhalos, who has two cats of her own, didn’t hesitate to take the gray-and-white cat in. She named the cat Splash and warmed her up with a beach towel before giving her the guest room at her house. With the help of her veterinarian, Vhalos nursed the shocked cat back to health. Splash is “extremely loving” with Vhalos, but she’s making slow progress in getting used to the other two young cats in the house. Vhalos continues to try to find Splash’s original owner but tells us, “As for now, little Splash is safe, has her own room, toys to play with, her very own scratching post, litterbox and water bowl to play in. She also has an adopted sister and brother that seem very interested in getting to know her.” — Read it at Arizona’s 12 News

When a couple in Villa San Lorenza a Flavione, Italy, returned to what was left of their home after an August earthquake that killed 300 people, they started calling for their Golden Retriever. Despite nine days of being buried in what remained of their home, Romeo barked in return. Firefighters helped them dig through the debris to get to their dog and pulled him out safely. The inspirational rescue was deemed a “sign of hope” by the newspaper Latina Quotidiano. — Read it at ABC News