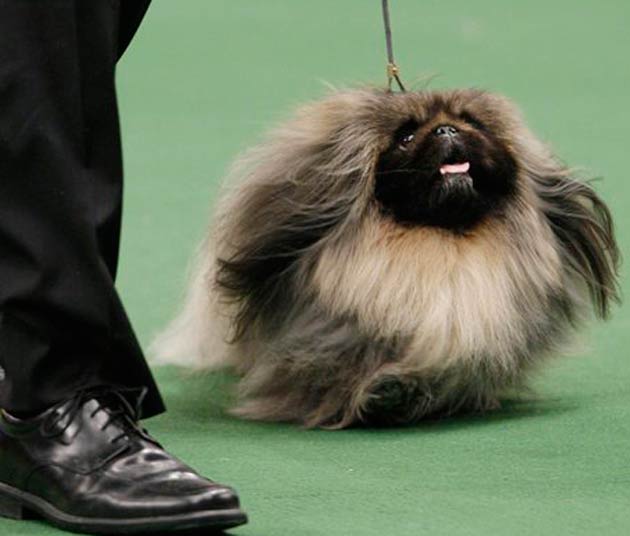 AP
Fur flying behind him, Westminster Best in Show winner Malachy, a Pekingese, struts his stuff in the ring Tuesday night.

Fan favorite Malachy the Pekingese claimed the coveted Best in Show title at the 136th annual Westminster Kennel Club Dog Show at Madison Square Garden in New York City on Tuesday night, making him the top dog out of seven representatives of popular breeds. The waddling, 4-year-old “lion dog” drew laughs from the crowd each time that he moved, especially when an announcer described the breed’s “unhurried gate.” It was the first win for the breed — described as small in stature but “bold, intelligent and independent in temperament” — since 1990.

CH. Palacegarden Malachy, who hales from Pennsylvania,lived up to his hype — and a prediction from a top Las Vegas oddsmaker — with the win. He was handled by David Fitzpatrick, one of his three co-owners.

“With seven wonderful and worthy contenders tonight, I have but one ribbon,” said Best in Show judge Cindy Vogels. “Best in Show . . . is the Pekingese.”

Malachy beat out 185 breeds and more than 2,000 dogs at the nation’s most prestigious show. He takes over the honor from last year’s winner, Hickory, a Scottish Deerhound, who now lives on a family farm in Virginia and is mom to a litter of nine puppies.

There are several elimination rounds at Westminster. At each level, the judge chooses the dog who most closely matches the breed standard. During the first contest, Malachy went up against a field of Pekingese to win Best of Breed. After competing with the other 22 breed winners in his category, including Pugs and Toy Poodles, the furry champion won Best of Toy Group. For the final battle, he was judged against six other group winners for Best in Show. Here's how they shaped up:

Best of Hound Group: A Wirehaired Dachshund named Cinders (CH. Raydachs Playing with Fire V) was Monday’s first group winner, taking the title for the Hound group. The 3-year-old decided to take a seat when it came time for photos following her win. "She's a clown," said handler Cheri Koppenhaver.

Best of Toy Group: Malachy bested a Brussels Griffon named Tina Fey and an Affenpinscher, who goes by Banana Joe. “Lots of buzz on this dog,” said veteran announcer David Frei. Spectators laughed as the Peke, his long hair covering his short legs, did his loop around the ring. "He doesn't run," handler Fitzpatrick told the AP. "He has a dignified Pekingese gait."

Best of Non-Sporting Group: Competing against Martha Stewart’s Chow Chow, Ghenghis Khan, Ian the Dalmatian (CH. Spotlights Ruffian) gracefully won the competitive Non-Sporting group title. No Dalmatian or Dachshund has ever won the top honor at Westminster. (See 10 popular breeds that have never won Best in Show.) “Lots of Best in Shows in that lineup,” said Frei of the group’s finalists. “Doesn’t have enough blue ribbons. It’s the first time I’ve said that this year.”

Best of Herding Group: The first night of competition was capped off with a win by a clear crowd favorite — a German Shepherd Dog named Cappy (CH. Babheim’s Captain Crunch). Cappy was handled by Jimmy Moses, who also handled a Best in Show–winning German Shepherd named Manhattan at Westminster 25 years ago.

Best of Sporting Group: Emily (CH. Shadagee Caught Red Handed), a 4-year-old Irish Setter from Connecticut who had 15 puppies last spring, stole hearts as she barked in the ring Tuesday night. She was visibly excited as she won the group, prancing and letting out a few more barks. Fans of Labrador Retrievers had their hopes up briefly as Windy the Lab was selected as a group finalist, but ultimately lost to the Irish Setter. The Labrador Retriever has never won a Best in Show title, while the Irish Setter has won 50.

Best of Working Group: “I just can’t imagine a Doberman with this name, but this is Fifi,” Frei said as he introduced CH. Protocol’s Veni Vidi Vici, the Doberman Pinscher who won the working group. Fifi, who was shown by her breeder and owner, was followed by Scarlet, a Boxer from New York. Spectators were also entertained by James, a Great Dane who is nearly as tall as his handler.

Best of Terrier Group: Kerry Blue Terrier Chelsey (CH. Perrisblu Kennislain’s Chelsey) is a champion who also enjoys the comfy life at home — getting to sleep in bed with handler Bill McFadden. This dog was clearly at home as the star of the terrier group, hopping up on the winner’s circle after he was called. He beat Buddy, a top-winning Skye Terrier who was a major fan favorite.

This year, Westminster welcomed six new breeds, including the American English Coonhound, the Entlebucher Mountain Dog, the Finnish Lapphund, the Cesky Terrier, the Norwegian Lundehund and the Xoloitzcuintli. A Xolo named Giorgio Armani made the final cut in the Non-Sporting group — and was a fan favorite — but he lost to the Dalmatian.

The Best in Show Party Is Just Beginning

Frei, who was in the announcer’s chair for the 23rd time this year, noted that although America's new top dog has already had a busy week, there is much more to come.

On Wednesday, the Westminster winner kicks off his victory tour with some high-profile appearances, making the rounds on TV morning shows and being treated to a steak at Sardi's. What better way for a little dog to celebrate his very big win.

Before taking home the coveted Westminster Best in Show, Malachy the Pekingese showed off his stuff in the ring and swept the competition.