Dec. 7, 2015: We've scoured the Web to find the best and most compelling animal stories, videos and photos. And it's all right here. 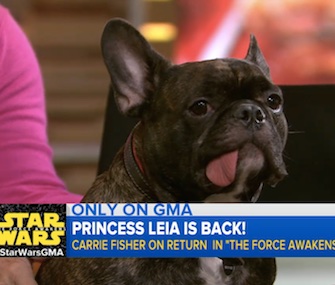 Gary Weighs in on “Star Wars”

With many Americans hoping to lighten their spirits after a difficult week, an interview with Carrie Fisher — and her dog Gary — went viral over the weekend. Fisher reprises her iconic role as Princess Leia, now General Leia, in the highly anticipated “Star Wars: The Force Awakens,” which opens in theaters Dec. 18. The 59-year-old actress kept ABC News’ Amy Robach laughing, in large part because of her companion, Gary the French Bulldog. The pooch sat in his own director’s chair beside Fisher, and spent the whole time with his pink tongue sticking out the side of his mouth. Fisher joked that the pose was Gary’s stunned reaction to the new film. “Gary, you saw it,” Fisher said. “The tongue wasn’t out of his mouth before he saw the movie, and that’s a review. It’ll happen to everyone. Worth it though, that’s how good it is — you won’t care that your tongue is out of your mouth like that.” Gary’s entertaining appearance might leave you wishing he had a cameo in the movie. — Watch it ABC News

A beautiful little visitor to Brooklyn’s Prospect Park has been drawing big crowds. A male painted bunting with a bright blue head, yellow and green shoulders, and a scarlet-orange belly has been spotted. A less colorful female was seen in 2011, but this was the first sighting of a male painted bunting in the park in recent memory. The Prospect Park Alliance said the bird was likely on his way to Florida or Central America for the winter, but he’s making his trek late in the year. Bird expert Tom Stephenson said a wind blowing from the West might be to blame for the bird being off course. — See photo at Live Science

A slender snake measuring about 15 inches with bulging black eyes has been discovered in the forests of the Andes. The colubrid serpent, a non-venomous snake, is grayish-brown with an iridescent sheen on the upper part of its body. The new species has a yellowish-white belly that makes it stand out. The species is described in the journal ZooKeys. — Read it at Science Daily 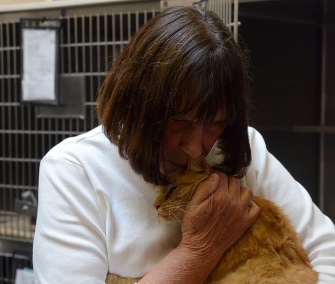 Ginger the orange tabby is finally home for the holidays — after being missing for eight long years. A Good Samaritan who found the cat as a stray brought her in to the Marin Humane Society in Novato, California. She was microchipped, and was quickly reunited with her owners. “Oh my goodness, you were just a baby when you ran away,” said her owner, Nancy Payne, as Ginger was placed in her arms. The shelter posted a video of the sweet reunion on Facebook Friday, noting that a reunion after eight years was a record for the group. — Read it at San Francisco’s ABC 7

We’ll leave you with another amazing reunion story. Polo, a Shih Tzu, was found the day before Thanksgiving in Washington, D.C. The poor pooch was locked in a crate next to a dumpster, and it was also clear he’d been neglected. Luckily, the Washington Humane Society located his microchip, and tracked down his owner, Jason Brandon. Brandon said Polo had been stolen two years ago while he was living in Miami, and he had since moved to New York. He drove to Washington Saturday and was happily reunited with his dog. "This is just unbelievable," said Brandon. "It's something you see on CNN!" — Read it and see photos from the Washington Humane Society via Facebook