December 19, 2016: We've scoured the Web to find the best and most compelling animal stories, videos and photos. And it's all right here. 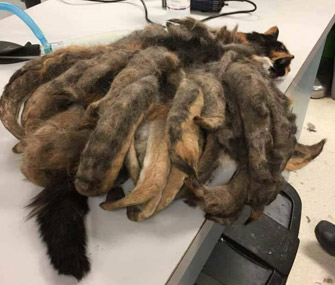 After her owner went into a nursing home, a Pennsylvania cat got a serious makeover. A medical team at the Animal Rescue League Shelter & Wildlife Center in Pittsburgh shaved two pounds of matted fur off Hidey, who will now be cared for by a distant relative of the cat’s owner. “She suffered from severe matting (dreadlocks, really), the likes of which had been neglected for years,” said a post on the shelter’s Facebook page on Friday. But now, Hidey will “finally have a chance at a happy and healthy life.” — Read it at People Pets

A retiring CWD (contract working dog) from Kuwait found his forever home, thanks to Mission K9 Rescue, a non-profit organization that helps retired military dogs get adopted. Keeley will be lounging on the sofa in the house of his new owners Judie and Rich according to the group’s Facebook page. Mission K9 is trying to raise $40,000 by year’s end — an anonymous donor has offered to match the funds, which will be used to place more retired working dogs in loving homes. — Read it at Mission K9’s Facebook

Researchers from Japan's Kobe University have found that when horses encounter problems they can’t solve themselves, they will turn to humans for assistance. Hiding carrots in a bucket that the horses couldn’t access, the researchers watched as the animals looked at and even nudged their human caretakers, communicating their need for help to reach the carrots. The scientists suggest these attributes are evidence of a high degree of cognitive skill. The results were published in the journal Animal Cognition. — Read it at Seeker 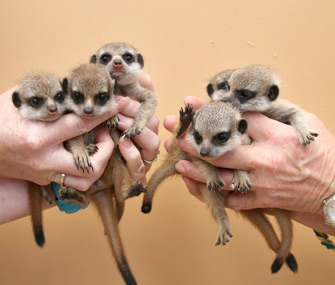 Paul Fahy, Taronga Zoo
The six playful meerkat pups born at the Taronga Zoo are starting to show their own personalities.

Taronga Zoo in Sydney, Australia, welcomed its largest litter of meerkats ever in November. The six playful pups are being monitored by keepers and are just now starting to venture out into their habitat. “They are growing a bit slower than our two previous litters, but they’re still hitting all the right milestones and starting to show their own little personalities,” said keeper Courtney Mahony. — Read it at Zooborns

Christmas came early for a momma cat who decided to have her litter in a special place — right under her owner’s Christmas tree. The four kittens, rightfully named Noel, Joy, Christmas and Faith, are healthy and will stay with Tink and her family, after being spayed and neutered. — Read it at People Pets