March 20, 2017: We've scoured the Web to find the best and most compelling animal stories, videos and photos. And it's all right here. 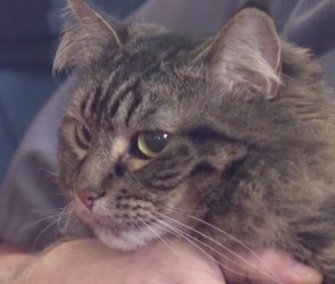 ABC News
Gracie, a Maine Coon cat, is credited with saving her owners from lethal levels of carbon monoxide in their home.

A Wisconsin couple is crediting their cat with saving their lives when the carbon monoxide level in their home reached lethal levels last month. Annette Shanahan woke up in so much distress that she thought she was “having a heart attack,” but then fell asleep again in a chair — until her Maine Coon cat, Gracie, started persistently rattling her bedroom door. “Gracie started pounding at the door. Pounding loud. She was really pounding,” she said. Annette and her husband woke up and barely managed to call 911 and their son. The Shanahans are extremely grateful to Gracie for waking them up. “We usually sleep with our door closed and right before we went to sleep she was outside our door meowing which is very unusual,” said Annette. “So I thought, ‘Oh I’ll just let her in. She wasn’t feeling well. She sensed something was wrong before that I guess … We were definitely saved by Grace. Saved by Gracie.” — Read it at ABC News

Biologists are increasingly optimistic that feeding a vaccine against the plague to prairie dogs could improve the success rate of endangered black-footed ferrets who are bred in captivity and reintroduced to the wild. The predators feed almost exclusively on prairie dogs, who live in big colonies that are regularly decimated by plague outbreaks. Starting in the fall, biologists plan to treat 40 square miles of prairie dog colonies in several Western states with peanut butter flavored vaccine pellets that they’ll fling from all-terrain vehicles for the rodents to find. — Read it at Phys.org

As a deer struggled to get off of an icy New Jersey pond for 24 hours over the weekend, wildlife officials decided it would be best to leave the deer alone. But when residents of a nearby condo complex said they’d take matters into their own hands to save the animal, authorities quickly brought in an amphibious vehicle and five crew members to take on the task. While they were working on the rescue, the boat started to take on water. The crew was saved by the Roxbury Fire Department and the deer was rescued by another man. In the end, everyone including the deer was OK. — Read it at USA Today 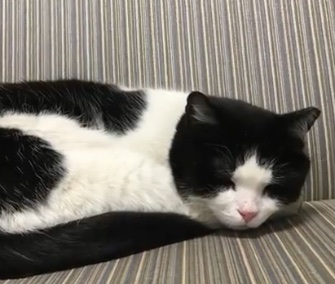 YouTube
Once a stray, Oreo now lives comfortably at a nursing home in Cleveland, Ohio.

Oreo wandered into a Cleveland, Ohio, nursing home about five years ago, but she just gained fame this month after Cleveland.com produced a video about her work looking out for the residents and staff there. The black and white cat lives on the main floor of the St. Augustine Health Ministries but doesn’t go upstairs to the residences. “She loves to have her head scratched,” said the facility’s director of advancement, Dana Carns. “Residents, staff and the children from our early learning center, look for Oreo. She is most often the greeter.” The cat delights the facility’s 200 residents. “I’m not sure if Oreo was in need of us, or we were in need of Oreo,” Carns said. — Read it at the Huffington Post

Brooke Mulford, 12, has been battling cancer for eight years, and has been confined to the Children's Hospital of Philadelphia since January. Recently, though, she had a distraction from the pain she suffers after her mom shared on Facebook that Brooke wanted to see the movie “A Dog’s Purpose.” She got that, and more. Brooke and her family got the chance to view the movie in the hospital, and they got special visits from the film’s screenwriter and Trip, the Golden Retriever who starred in the film. “It was the best day we’ve had in so long,” said Brooke’s mom, Amy. “It’s what my heart needed.” — Read it from GMA via Yahoo