April 13, 2017: We've scoured the Web to find the best and most compelling animal stories, videos and photos. And it's all right here. 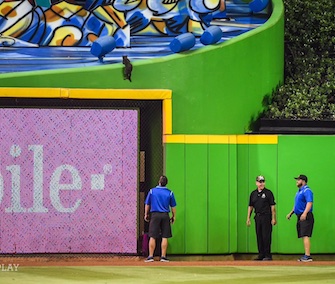 Twitter / Marlins Park
A cat climbed a sculpture during a Miami Marlins game on Tuesday.

Fans at a Miami Marlins game were treated to quite a show when a skittish gray cat entered the field, slinking along the outfield wall on Tuesday. When a player and groundskeeper tried to approach the wayward kitty, he darted away — and climbed an advertisement, finding himself on an eclectic sculpture that lights up and sprays water when the home team gets a homerun. “Look at this cat,” exclaimed Marlins announcer Rich Waltz on the team’s broadcast. “Terrific stuff by the cat. Outstanding!” The team said they wouldn’t spray the water if the Marlins scored, and the cat stayed in his seat. The Marlins beat the Atlanta Braves 8-4, and the team said he ran off and out of sight more than an hour after the game finished. — Watch it at The New York Times

Last week, a tornado struck a mile from the nest of bald eagles Liberty and Justice in Washington, D.C. In an amazing video released by the Earth Conservation Corps, mom Liberty apparently knew the storm was coming and arrived back at her nest just as strong gusts of wind were beginning last Thursday. She sits on her eaglet to shelter her as the tree limbs supporting the nest wave in the wind. Luckily, the tree and nest stayed intact, and the eagles were fine. The eaglet was born on March 15 and her name will be selected from eight choices the public is being asked to vote on, including Spirit, Courage and Glory. — Watch it at the Washington Post

Orphaned Coyote Gets a Second Chance

A kind rescuer brought a tiny coyote puppy to Lake Tahoe Wildlife Care in California last week, the group said. The adorable little guy was the only survivor in his litter. “He is very little —only about four weeks old — but full of energy and very wriggly!” the rescue group said in a Facebook post Tuesday. After a difficult start at life, he’ll now get the opportunity to thrive. LTWC said they’ll do everything possible to keep the pup wild — teaching him to hunt and limiting human contact — so he can be released once he’s old enough to survive on his own. — See photos at Lake Tahoe Wildlife Care’s Facebook 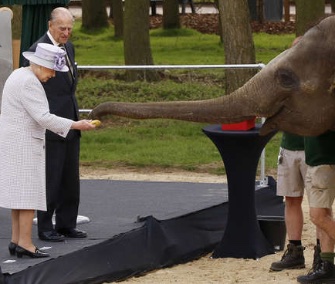 Donna the elephant had a brush with royalty at England’s Whipsnade Zoo on Tuesday. Queen Elizabeth and her husband, Prince Philip, fed Donna bananas to celebrate the opening of the zoo’s new Elephant Centre. The queen also met little Elizabeth, an 8-month-old elephant who was named for her to mark her 90th birthday. The queen is the Patron of the Zoological Society of London. — Read it at Today

Army Pvt. Katelyn Gallagher returned from a 9-month training program on Tuesday and was reunited with her beloved Bloodhound, Buck. It was a reunion Gallagher feared wouldn’t happen. When she left for training last year, she left Buck in the care of a family friend. But when she came home to Cleveland on leave in December, she went to get Buck and was told the friend had given him away — and wouldn’t tell her where he was, she said. Charges were filed against the man who gave the dog away, and Buck was returned to Gallagher’s family in February. “I didn’t want to battle. I didn't want other people to be hurt. I just wanted my boy back, that’s all,” Gallagher said. This was the first time she’d been home since Buck was returned — and he had lots of hugs and kisses for her. — Watch it at Fox 8 Cleveland