June 23, 2015: We've scoured the Web to find the best and most compelling animal stories, videos and photos. And it's all right here. 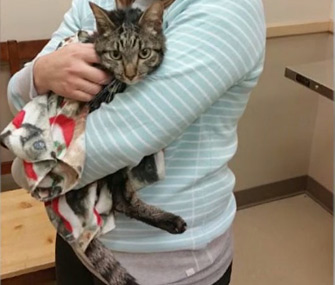 When Kymberly and Jesse Chelf were packing to move from El Paso, Texas to Fairbanks, Alaska, their cat Moosie disappeared. "We just assumed he had run away, which was very unlike Moosie," Kymberly Chelf said. "He's just a very loyal, loving cat." It wasn’t until two months later, when their belongings finally arrived in Alaska that they heard a mighty meow — Moosie had been inside a futon mattress on the moving truck for the entire journey. The cat was rushed to a nearby veterinary hospital for treatment. Moosie was given fluids and a blood transfusion, and also underwent several surgeries. Moosie's doctors can't say how he survived for 64 days without food or water, but they are optimistic about his recovery. "It's unbelievable, but we are so glad to have him alive, and we can't wait for him to come back home," Kymberly Chelf said.— Read it at People Pets

Speaking of durable cats, a French couple got the surprise of their life when they took a microlight plane up for a spin — and spotted a cat balancing precariously on the craft's wing The cat had been enjoying a nap until it was whisked into the air. Fortunately, everyone landed safe and sound, and a video of the harrowing flight has gone viral. — Read it and see it at The Press and Journal 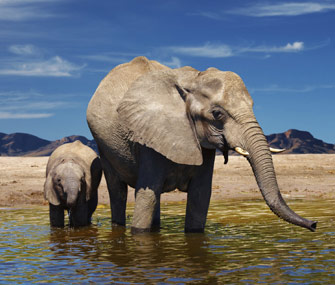 Thinkstock
A new study finds that Earth is in its sixth mass extinction as many animals are becoming endangered at a faster-than-normal rate.


A new study find that diverse animals across the world are dying out up to 114 times faster than they would have without human activity — meaning the number of species that went extinct in the past 100 years would have taken 11,400 years to go extinct under natural extinction rates. And these human activities, causing pollution, habitat loss and ocean acidification, are leading Earth into its sixth mass extinction. "Avoiding a true sixth mass extinction will require rapid, greatly intensified efforts to conserve already threatened species, and to alleviate pressures on their populations — notably, habitat loss, over-exploitation for economic gain and climate change," the researchers wrote. The study was published in the journal Science Advances. — Read it at Live Science

A 6.3-meter-long basking shark was accidentally caught be a trawler in Australian seas — just the third time a shark like this has been seen in the region in more than 160 years. The basking shark is the second largest fish species in the world, after the whale shark. "These rare encounters can provide many of the missing pieces of knowledge that help broader conservation and biological research," said Martin Gomon, Museum Victoria's senior curator of ichthyology. — Read it at CNN

Tristen Kerr, a 62-year-old California veteran diagnosed with terminal cancer, has one wish before he dies: to find a home for his service dog, Kane, a 7-year-old Doberman Pinscher. Kerr said Kane has helped him get through the difficult months since his diagnosis. "He's all I have," Kerr said. "And it's very important to me to know that he's going to have a good home." Kerr's ideal home for Kane would be with someone who would give the dog lots of time and attention. — Read it at KCRA