April 6, 2017: We've scoured the Web to find the best and most compelling animal stories, videos and photos. And it's all right here. 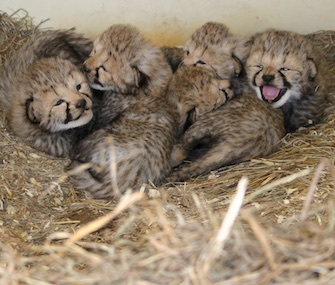 National Zoo
Two litters of five cheetah cubs each are thriving at the Smithsonian Conservation Biology Institute in Virginia.

The animal care staff at the Smithsonian Conservation Biology Institute in Virginia must be seeing spots! Two large cheetah litters were born in one week in March. Happy, 3, had five healthy cubs on March 23, while Miti, 7, gave birth to seven cubs on March 28. Sadly, two of them were very small and less active, and didn’t survive. But luckily, the 10 surviving cubs are doing well and being raised by their attentive moms. Each of the litters of five includes two boys and three girls. “The average litter size is three, so this time we’ve got an incredible pile of cubs,” said Adrienne Crosier, SCBI cheetah biologist and manager of the Association of Zoos and Aquariums’ Cheetah Species Survival Plan. “In just one week, we increased the number of cheetahs at SCBI by 50 percent.” The Virginia facility is affiliated with the National Zoo in Washington. — Read it at the National Zoo

In a controversial new “emergency plan” to save the vaquita marina porpoise from extinction, Mexico’s government announced plans to put some of the animals in a temporary refuge. But conservationists warn the world’s smallest porpoise species isn’t an animal that can thrive in captivity. There are only 30 vaquitas remaining, and they face extinction by 2022. The porpoises are threatened by illegal fishing in the Gulf of California. They get caught up in nets that are meant to catch the totoaba, which is an endangered fish. — Read it from AFP via Yahoo

Known for its animal sanctuary in Utah, Best Friends Animal Society is spreading the love. On Tuesday, they opened an adoption center in New York City. The New York space has room for about 30 dogs and cats, and includes a state-of-the-art kitten nursery. They’re hoping the center will help educate animal lovers, and will be another step toward their goal of making all U.S. animal shelters no-kill shelters by 2025. Best Friends also has an adoption center in Los Angeles. — Read it at the Huffington Post 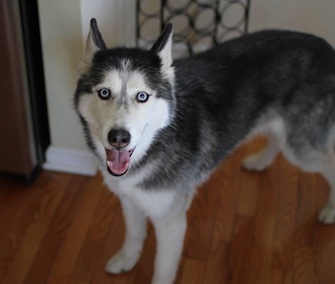 Mishka the Talking Dog Dies at 14

If you love cute animal videos, there’s a good chance you remember Internet star Mishka the Talking Husky. The beautiful dog took her talent beyond the online world, and also appeared on TV talk shows, commercials and in movies. “She stayed strong until the end and went peacefully,” her owners wrote on her Facebook page Wednesday. “We will miss her terribly but know in our hearts that it was her time to go.” The announcement of the 14-year-old dog’s death had an overwhelming response from her 1 million followers, with nearly 100,000 reacting to it and about 14,000 comments from those offering their condolences. — Read it at Mishka’s Facebook

Only a Beagle! We often see dogs make their way onto the soccer pitch, but usually they’re caught or chased off the field rather quickly. It wasn’t quite that easy when a very happy Beagle dashed onto the field during a match between Halesowen Town and Skelmersdale United in the U.K. The mischievous pooch outran and outsmarted officials and players who attempted to catch him, stopping play for a whopping seven minutes. The pup was finally caught by Halestown defender Asa Charlton. “It may have been really frustrating at the time but it’s all good fun,” said team manager John Hill. “Asa managed to get the dog off the pitch, and I do believe it was Asa’s family dog.” The incident was sped up and set to the Benny Hill theme song in a funny video that’s gone viral. — Watch it at the U.K.’s Sun