March 6, 2017: We've scoured the Web to find the best and most compelling animal stories, videos and photos. And it's all right here. 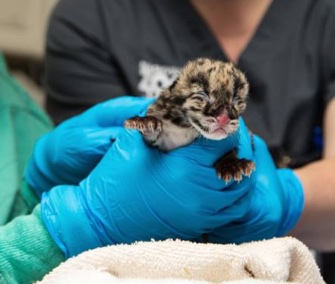 A clouded leopard cub, among the rarest cat species in the world, was born on March 1 at the Nashville Zoo to mom Tula. This special baby boy is the first of his species to be born from an artificial insemination procedure using sperm that had been frozen. The tiny cub is being bottle fed in the nursery. The zoo said her mom has a history of being aggressive toward her cubs, so the decision was made to hand-rear him immediately to ensure his safety. The zoo has given naming rights to the researchers at the Smithsonian’s National Zoo and Conservation Biology Institute, who helped make this history-making birth possible. — Read it at Live Science

Why Are Pandas Black and White?

The scientists who answered why zebras have black and white stripes now have an explanation for the panda’s unique coloring. The study from the University of California-Davis found that most of the panda, including its face, neck, belly and behind, is white to help camouflage it in snow habitats. Its arms and legs are black to help it hide in the shade. The markings on the bear’s head are used to communicate. Dark ears, for example, may help convey a warning to predators. The study was published in the journal Behavioral Ecology. — Read it at Science Daily


Iditarod Route Changed Due to Lack of Snow

Alaska’s big sled dog race, the Iditarod, usually begins just north of Anchorage in Willow. But this year, it’s kicking off nearly 300 miles further north in Fairbanks due to lack of snow. It will avoid much of the Alaska Range and continue due west to the finish line in Nome. The race will start today, giving the mushers more time to travel to the new starting line. This is the second time in three years that officials have had to change the course. — Read it at CNN 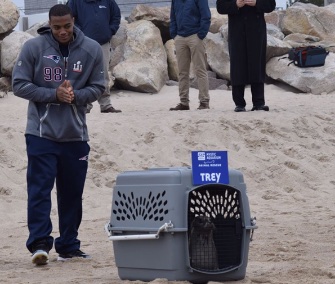 Instagram / Mystic Aquarium
Patriots defender Trey Flowers was on hand for the release of a rehabilitated seal who was named for him.

After a pep talk from New England Patriots defensive end Trey Flowers, a rehabilitated seal who was named for the 23-year-old Super Bowl champ was released on a Rhode Island beach last week. “I told her that she was strong and could take over the world if she wants! I’m rooting for her,” Flowers said. He also snapped a selfie with his namesake while she waited in her crate. Trey the seal had been rescued from Rockaway, New York, in December. She was treated for several wounds at the Mystic Aquarium’s Animal Rescue Clinic and then spent time recovering there. The aquarium invited Flowers to help with the release and he quickly agreed. — Read it at People Pets

A Hackney, England, police officer in northeast London was out on patrol when he spotted a newborn, furless squirrel from the sidewalk. “Not what you normally find on burglary patrols,” the Hackney Police said in a Twitter post last week with photos of the officer wearing gloves and rescuing the baby. Police believe the baby’s mom dropped it as she carried it to a new nest, and “safely reunited it with its mother,” the Tweet said. The department didn’t reveal how it tracked the mom down. — See photos at the Huffington Post