June 14, 2016: We've scoured the Web to find the best and most compelling animal stories, videos and photos. And it's all right here. 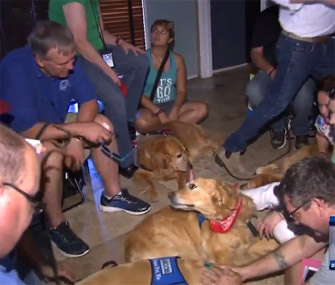 ABC7 Chicago
Comfort dogs will offer support and healing to the people affected by the tragedy in Orlando.


A team of 12 comfort dogs from suburban Chicago headed to Orlando Monday to offer support and healing for people locally affected by the massacre at Pulse nightclub that left 49 dead over the weekend. They will be visiting counseling centers and local hospitals, as well as meeting with survivors, injured victims and first responders. “When you pet the dogs they pick up the emotions of people petting them," said Tim Hetzner of Comfort Dog Ministry, "and it's the same way when you're talking to people and hearing their stories, you feel for them." The team plans to stay through next Monday.— Read it at ABC7 Chicago

At a music festival in Grand Bend, Ontario, an announcer told the crowd that there was a dog locked in a hot car and asked for the owner to come let the dog out. When no one arrived, one man took it upon himself to break the window of the car. In a video of the rescue posted to Facebook, the man is seen smashing the window of the BMW with a rock while a crowd looks on. The man, who has not been identified, was able to pull the weak, disoriented dog out of the car. "After the dog was rescued, the owners showed up 50 minutes later," Will Costa, who shot the video, told The Dodo. The dog is currently in custody of the police. — Read it at The Dodo

To unite shark conservation efforts worldwide, an online shark database has been launched by the Food and Agriculture Organization of the United Nations. The database contains information on the world’s most threatened sharks. "This shark measures database is a 'one-stop shop' for those wishing to find information on shark, ray and skate guidance and management measures,” says Kim Friedman, a senior fishery resources officer who works with FAO member states. Info within the database will be monitored and updated every six months. — Read it at Seeker 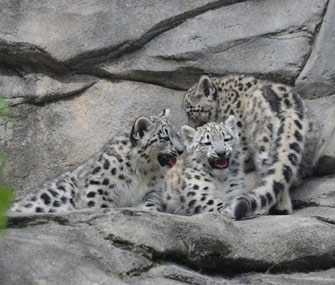 Akron Zoo / Facebook
Snow leopards Layan, Altai and Asha recently made their public debut at the Akron Zoo in Ohio.

Three snow leopard clubs born at the Akron Zoo in March made their first public appearance recently — and picked their own names. The zookeepers wrote the six names they had narrowed the choices down to on toys and put them in the exhibit. The cubs were then release into the exhibit and were given the name of the first toy they approached: Layan, Altai and Asha. Snow leopards are currently listed as endangered, with experts estimating that only 4,000 to 6,500 remain in the wild. —Read it at Zooborns

Born without eyes and with deformed back legs, Noah, a white Bichon-Poodle mix, is helping kids in a Wisconsin school look past outward appearances. The school, which has been struggling with a bullying problem, called Noah’s owner Lisa Marie looking for help. She knew Noah was perfect for the job. “By the time we leave they don't see Noah as a disabled dog. That's how I want humans to see each other,” says Lisa Marie. Noah's message is spreadingfast, both locally and nationally — he was featured in the school's yearbook as the fifth grade's Favorite Rock Star, and he's currently asemi finalist for the Emerging Hero Dog Award at the American Humane Associations Hero Dog Awards. And Lisa Marie couldn’t be more proud: “If we can stop one kid from being bullied to the point of suicide, Noah has done his job.” — Read it at People Pets