Oct. 30, 2015: We've scoured the Web to find the best and most compelling animal stories, videos and photos. And it's all right here. 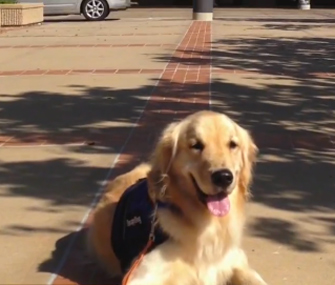 KGTV via People
When Sonny and Jeff Mo learned that their Golden Retriever had a tumor in his skull, they decided to create the ultimate bucket list for him.

When Sony and Jeff Mo’s 5-year-old Golden Retriever Kobe stopped eating and started acting depressed, they grew concerned. A trip to the vet confirmed their fears —Kobe had a 2-inch tumor in his skull that would likely grow back even if operated on. So the couple created the ultimate bucket list for their dog, who had less than a year to live. So far, Kobe, who’s a trained therapy dog and has spent his life bringing comfort to others, has gotten a behind-the-scenes look at SeaWorld and will spend a day at a fire station to be a fireman’s helper. “We have some amount of time with him left; we kind of want to make the best of it,” said Jeff.— Read it at People

Why A Whale Poop Study Has Some Scientists Worried

The amount of whale poop in our oceans has declined 77 percent in the past tens of thousands of years, according to a recent study. This is a concern to scientists because the nutrients in animal excrement, especially phosphorus, fertilize the planet and a lack of it can disrupt both the ocean’s and land’s ecosystems. "I was surprised that large animals were disproportionately important for the transport of nutrients," said Dr. Chris Doughty, lead author of the study. "Here we have shown that, in the past, animals constituted a global system of recycling phosphorus. By increasing populations of large, free-ranging animals we can partially replace this system of recycling and thus increase phosphorus concentrations on land." The study was published in the Proceedings of the National Academy of Sciences. — Read it at Huffington Post

The latest tiny bird skeleton uncovered by scientists is the oldest modern bird specimen known to survive the dinosaur mass extinction in North America and suggests to researchers that birds rapidly evolved in the 3 to 4 million years after the dinosaurs died —much faster than previously thought. "This bird has some wide implications for the timing of the radiation [diversification] of modern birds," said study co-author Daniel Ksepka, curator of science at the Bruce Museum in Greenwich, Conn. — Read it at Live Science 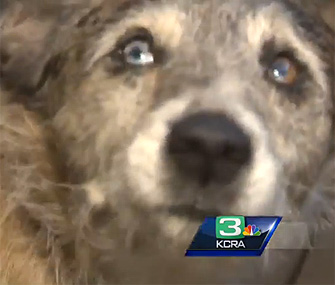 KCRA News
Tiki the dog is recovering after her owner, Kirk Fetter, saved her from the jaws of a mountain lion.

When Kirk Fetter heard a commotion on his deck around 11:30 p.m., he stepped outside and saw his dog Tiki in the jaws of a mountain lion. He immediately charged the animal. “My wife did throw a couple buckets and stuff that was on the deck at the dog-gone thing as I was running down there,” Fetter said. “[My wife] completely freaked out when I was down here because the mountain lion didn’t let go until I was right on top of it.” Tiki suffered a few puncture wounds but is expected to be OK. Fetter hopes his story serves as a warning for other pet owners in secluded areas to be careful. “Keep your pets in at night and watch your children at dusk,” Fetter said. — Read it at KCRA News

The world’s most perfect couple is now even more perfect, thanks to their recent adoption of a 4-year-old shelter pup named Millie. The Clooneys rescued the Basset Hound from the San Gabriel Valley Humane Society— a stroke of luck for the dog who was found scrounging for food scraps outside of a restaurant earlier this month. “Millie found her forever home and the Clooneys have a new best friend,” said Jennifer Clarke, the shelter's social media coordinator. “They all left together as one big happy family!"— Read it at People