March 21, 2016: We've scoured the Web to find the best and most compelling animal stories, videos and photos. And it's all right here. 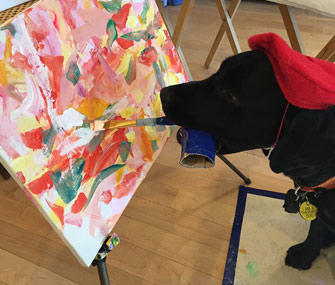 When Dagger, a black Labrador Retriever, retired from gig as a service dog, he began to keep his owner, Yvonne, company as she painted. Then one day he started nudging her. “I stopped painting and said, 'Dagger, do you want to paint'?” she says. “His tail immediately started to wag like crazy." Now he’s a full-fledged artist. "Some of Dagger's works are very abstract and some seem to have hidden images in them," Yvonne says."It's very interesting." Dagger's already sold a few pieces, and proceeds go toCanine Companions for Independence. — Read it at Mashable

Two-year-old Leroy didn’t have long to live. A rescue dog, Leroy had suffered some kind of trauma and was paralyzed in his hind legs. But a group of Boise State University engineering students wanted to make his final months a little more comfortable and built him a wheelchair out of baby stroller parts. "I've been bringing Leroy home for day trips and weekend outings for four months now and last weekend, when he was in his chair and playing fetch, was easily the happiest and most relaxed I've ever seen him,” says Brittany Sundell, a resident director at the college. “He was comfortable enough that he even rolled on his back for belly rubs which had never happened before.” Leroy sadly passed away late last week, but his final four months were full of love, the Bully Boise Breed Rescue group said in a Facebook post. — Read it at People Pets

Record-Breaking Number of Butterfly Species Found in One Park

Researchers from the Wildlife Conservation Society have already identified 950 species of butterflies and 130 subspecies Bolivia's Madidi National Park— and they estimate that there could be at least 1,500 species or more. For perspective, there are only 725 butterfly species in the entire United States and Canada combined. WCS Madidi landscape director Robert Wallace says that the park "bridges the tropical Andes and the Amazon, which are the two most biologically diverse regions on earth." — Read it at Discovery News 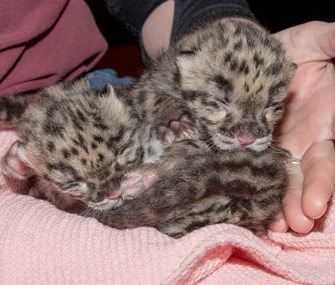 Two clouded leopard cubs were born in February at Tampa Lowry Park Zoo — and abandoned by their mother within 24 hours. Zookeepers stepped in and hand-reared the cubs, who are now thriving. “The birth of thesecubsis an example of the collective efforts to manage this species within North American zoos to ensure their survival,” says Dr. Larry Killmar, chief zoological officer, senior vice president and zoo director. Clouded leopards are listed as vulnerable by the International Union for Conservation of Nature. — Read it at Zooborns

Cat is “Dad” to Seven Chihuahuas

Ritchie, a cat living in Rangsit, Bangkok, was the first family pet of the Disapiroms. Then they added a Chihuahua, and then another, until they had seven of the tiny dogs and one cat — who seemed to be in charge. “Ritchie takes care of the dogs. He's the leader now,” Pusanisa Disapirom says. “At bedtime, if the dogs are loud, Ritchie will let out a loud meow like he's telling them to shut up.” The cat and dogs have created an adorable bond that Pusanisa documents on Instagram. “They make me want to come home,” she says. — Read it at People Pets