August 14, 2015: We've scoured the Web to find the best and most compelling animal stories, videos and photos. And it's all right here. 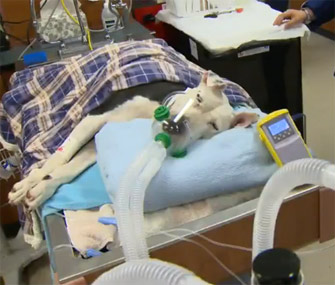 WTAE
Ophelia the Pit Bull is expected to recover from a 200 foot fall off a highway overpass, thanks to quick rescue by EMS workers.

When a woman in Pennsylvania spotted a Pit Bull on a busy overpass, she tried to help it, but the dog became frightened and jumped — 200 feet down. An EMS team called to the scene rushed the dog to an emergency vet clinic; she had several broken bones in her legs and some internal bleeding, and she was in shock. To make sure she would get the care she needed, the EMS team paid the initial $700 bill themselves. Ophelia, named by the EMS workers, has a long way to go as she recovers from her injuries, but she is eating and has started to walk and is expected to survive. "With all of the love and support she is getting we are hopeful she will continue to improve everyday," Dr. Christine Guenther of Pittsburg Veterinary Specialty and Emergency Center said. A GoFundMe account has been set up for the dog, whose estimated vet care bills will be around $8,000. — Read it at WTAE

When a hapless groundhog at Lehigh University in Pennsylvania got his head stuck in a can, two campus police officers stepped in to help. One officer's body camera recorded his efforts to pull the can off with his hand while concerned onlookers encouraged the groundhog to "just relax!" Finally, using a dog snare and a lot of patience, the officers were able to free the groundhog, who ran off to safety. — Read it and watch it at Time

The Flying Spaghetti Monster may not be a myth after all: A BP oil crew off the coast of Angola videotaped a strange-looking sea creature some 4,000 feet underwater with a remotely operated underwater vehicle, or ROV. The animal, whose proper name is Bathyphysa conifer, looks like a bowl of spaghetti noodles dumped upside down. Researchers identified it as a siphonophore, one of a group of "colonial animals" related to jellyfish and corals. Colonial animals are made up of many different multicellular organisms. Bathyphysa conifer uses its arm-like appendages — or spaghetti — to catch food. — Read it at Live Science 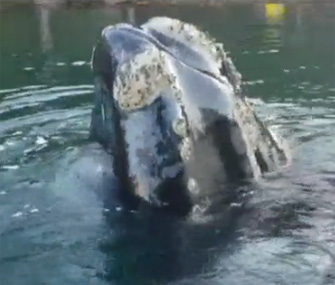 NBC News
A good Samaritan fisherman freed a whale from a plastic bag that was caught near his mouth.

A surprisingly close encounter off the coast of Australia led a fisherman to help save a whale who had a plastic bag and fishing line caught near its mouth. Ivan Iskenderian was out fishing with friends when the whale swam up next to their boat. “I sorta just reached out, (the whale) sorta wanted me to grab it (the plastic bag)," Iskenderian said. "I just picked it up and took it off, ripped it off a bit." Iskenderian's buddies started cheering — and the whale seemed happy, too. "Then it was just here playing around, seemed quite happy about it," Iskenderian said. "It was really inquisitive ... sort of taking its eye out of the water and looking at us." The entire incident was caught on video. — Read it and watch it at NBC News

Screen Dog’s Legacy to Live on Through Brother

Though Uggie, the screen-acting dog who helped "The Artist" win an Oscar, died last Friday, his brother Dash is ready to step up and fill his, well … paws. Dash, also a Jack Russell Terrier, has been training with Uggie’s owner Oscar Von Muller since Uggie’s retirement from the big screen in 2012, and now he’s ready to go to work. Dash is listed on the animal training website Animal Savvy, where Von Muller works, as a highly trained small dog available to act in movies, television and commercials. — Read it at People Pets