March 21, 2017: We've scoured the Web to find the best and most compelling animal stories, videos and photos. And it's all right here. 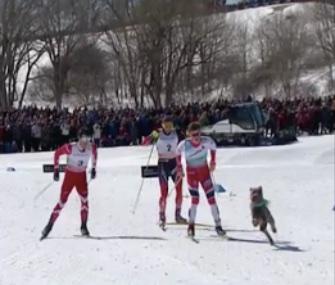 SB Nation
A dog jumped into the World Cup cross country ski race in Quebec City over the weekend.

The leaders in the World Cup cross-country skiing race in Quebec City briefly had an added competitor when a dog raced alongside them over the weekend. In a video of the race, an excited announcer yells, “They’re being chased by a dog out there!” The dog ran out in front of the racers and looked like he wanted to play — but luckily he quickly got out of the way and didn’t cause anyone to lose their place. That made him just a delightful addition to the competition. “Good boy, good boy!” the announcer praised him. — Watch it at SB Nation

Study: Parrot Has a Contagious Laugh

New research shows the kea parrot in New Zealand lets out a laugh-like call when having a good time, and it’s “emotionally contagious,” putting kea parrots who hear it in a playful mood. This makes the clever bird the first non-mammal found to have emotionally contagious playful vocalizations. Researchers said the behavior is most similar to that of children who giggle while they play. The findings were published in the journal Current Biology. — Read it at Seeker

Blue Buffalo Company is recalling some of its BLUE Wilderness Rocky Mountain Recipe Red Meat Dinner Wet Food for Adult Dogs, saying it could have elevated levels of beef thyroid hormones. The Food and Drug Administration says it has had one report of a dog showing symptoms from the hormones but the dog has now made a full recovery. Ingesting high levels of beef thyroid hormones could cause weight loss, increased heart rate, restlessness and increased thirst and urination in dogs. Long-term effects include vomiting, diarrhea and rapid or difficult breathing. If you have the product with the UPC code 840243101153 and a best by date of June 7, 2019, stop feeding it to your pet and contact your veterinarian. — Read it at Florida’s WFLA 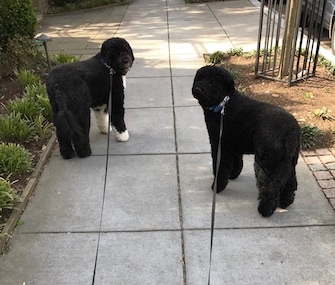 Twitter / Michelle Obama
Former first dogs Bo and Sunny Obama stepped out of their new D.C. home for a spring walk on Monday.

Bo and Sunny Get Moving for Spring

Former First Lady Michelle Obama Tweeted a photo of Bo and Sunny as they headed out of a walk with their mom on Monday night — and it’s one of the first glimpses we’ve had of the doggie duo since they moved out of the White House two months ago. “Look who has a spring in their step! Celebrate the #FirstDayofSpring by grabbing a friend, heading outside, and getting moving,” Obama captioned the photo of the two Portuguese Water Dogs. The dogs went for a stroll in their new neighborhood in Washington, D.C. Bo, 8, and Sunny, 4, are settling into their rented home in the Kalorama neighborhood of D.C. after growing up at 1600 Pennsylvania Avenue. — Read it at People Pets

Bobby Bat Ears, a foster kitten in Australia, is winning hearts around the globe with a viral video of his adorable quirk: he wiggles his ears while drinking from a bottle. The little black and white kitten was found underneath a lemon tree in Melbourne last month. The video was posted to the 2nd Chance Cat Rescue’s Facebook page, where it’s been viewed nearly 4 million times. “We thought he was hilarious. He’s done that since we first got him. I didn’t think to film it until a week later,” said his foster mom, Annemarie Veneros. Bobby is hoping all the attention will help him find a forever home when he goes up for adoption in about a month. — Watch it at the U.K.’s Daily Mail