December 28, 2015: We've scoured the Web to find the best and most compelling animal stories, videos and photos. And it's all right here. 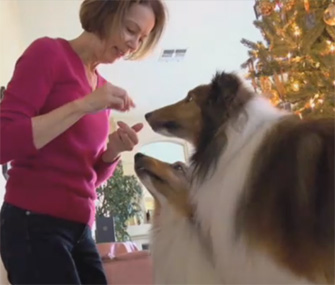 ABC News
Willie the Sheltie was found in Elko, Nevada — a town 300 miles away from where he ran off.

While vacationing in the Pioche Hills in 2009, David and Allison Marks lost their Shetland Sheepdog, Willie, when he ran off after the scent of a rabbit. "Willie's brother Waylon came back, but he did not,” said David. “We searched all weekend in a snowstormin the mountains of Nevada, but we never saw any evidence that Willie was anywhere around." Then, about two weeks ago, the Marks got a call from an animal shelter in Elko, Nevada — a town 300 miles away — that Willie had been found. "I couldn't believe it. It was an absolute surprise, and the perfect Christmas gift," said David. Though they’re curious what his past six years have been like, the family says since Willie has been home, everything feels “complete again.” — Read it at ABC News

In other happy news, a woman in Irmo, South Carolina drove more than 13 hours on Saturday to return a Texas farmer’s missing dog to him in time for the holidays. Kelly Warr saw a post on Facebook asking for help reuniting Leroy Filla, an 80-year-old man struggling with Parkinson’s, with his “best friend” Ace. Ace, an adventurous dog, had run off from his Texas farm and made his way to South Carolina, where he was being cared for by Brannon Rutherford. Through Ace's microchip, Rutherford was able to contact Filla and his son in Texas and let them know that Ace was safe. Filla told his son that while he didn't want anyone to go to any trouble to get Ace home, "I sure do miss him." That was enough for Rutherford, who started looking for a way to get Ace back to Texas — and that's when she and Warr connected. "This was not just a one person effort, this is a lot of people that believed in getting this man his companion back,” she says. — Read it at WLTX

A dinosaur skull that once belonged on the head of a Tyrannosaurus bataar, a cousin of the Tyrannosaurus rex, and was bought at auction by actor Nicholas Cage for $276,000, is being returned to Mongolia its country of origin. A statement released by the Mongolian government claimed the skull was taken unlawfully from the Gobi Desert and illegally transported to the United States. Cage, for his part, consented to the return when he learned the truth behind the fossil.— Read it at Live Science 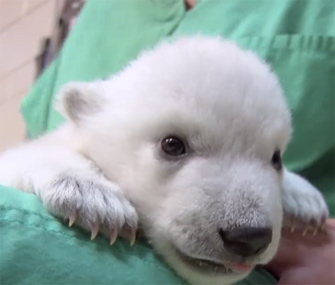 Columbus Zoo and Aquarium via Facebook
This baby polar bear's keepers are hand-feeding her every four hours.

A 7-week-old polar bear cub at the Columbus Zoo is now clocking in at 6 pounds and 17.5 inches long. Her eyes are open and she likes to scoot around on yoga mats. Zookeepers are hand-feeding her every four hours and say they’re pleased with her progress.— Read it and see the video at Facebook

When he was just a puppy, neglectful owners left Brutus the Rottweiler outside in freezing weather. All four of his paws suffered frostbite and needed to be amputated. A company named OrthoPets took on his case and created prosthetic paws to get Brutus back on his feet. "He can get out and do normal doggy things," says OrthoPets founder Martin Kauffman. "And it just makes you feel so good." — Read it at The Dodo