September 6, 2016: We've scoured the Web to find the best and most compelling animal stories, videos and photos. And it's all right here. 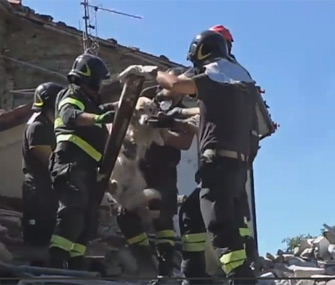 ABC News
Firefighters in Italy helped rescue Romeo after being trapped in the rubble of his home for nine days.

Nine days after the earthquake in Italy that left 300 people dead and thousands more injured, a couple returning to their destroyed home in Villa San Lorenza a Flavione got a welcome surprise. As they searched the rubble of their home, they called for their Golden Retriever, Romeo, who they had never given up hope of finding after the quake — and they heard a bark in return. Firefighters helped dig through the rubble and rescue the dog. The newspaper Latina Quotidiano called Romeo’s survival a “sign of hope.” — Read it at ABC News

An insecticide targeting Zika-carrying mosquitoes killed millions of honeybees in South Carolina after an aerial spraying. One beekeeper alone lost 46 hives — more than 3 million bees. "Now, I'm going to have to destroy my hives, the honey, all my equipment. It's all contaminated,” said Juanita Stanley, co-owner of Flowertown Bee Hive and Supply in Summerville, South Carolina. The state says they are “saddened” by the outcome and are reviewing their notification procedures before spraying again. — Read it at CNN

The Loch Ness Monster may remain a mystery, but the Storr Lochs Monster, a ferocious-looking creature, has just been unveiled by scientists. Classified as an ichthyosaur, the animal is believed to have been more than 13 feet long and especially toothy. The fossil remains of the now-extinct marine reptile were found in Scotland and will “prove to be the crown jewel” in the country’s Jurassic history. — Read it at Seeker 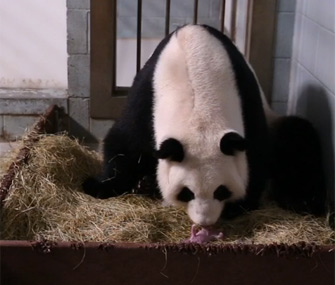 Giant panda Lun Lun gave birth to her second set of twins on Saturday — the sixth and seventh pandas born at the Atlanta Zoo. "We're thrilled and relieved that the second ofLunLun'stwins has arrived," said Hayley Murphy, the zoo's Vice President of Animal Divisions. "Our focus now will be the care and monitoring of the cubs andLunLunto ensure that both cubs have the best opportunityto succeed." While the pandas won’t make their debut until December of January, onlookers can catch a glimpse of the tiny cubs on the zoo’s live panda cam. — Read and see it at 11 Alive

Plus: In other good news for giant panda lovers, the species has been downgraded from endangered to vulnerable on the International Union for Conservation of Nature Red List of Threatened Species. The status change is a result of 30 years of conservation efforts aimed at protecting the animal. — Read it at People Pets

A 7-month-old pup from Boise, Idaho, has a new lease on life thanks to a custom-made high chair. Eli suffers from megaesophagus, a condition that doesn’t allow solid food to travel from his throat to his stomach. But now, thanks to the special chair and gravity, he can overcome that issue. “For once he’s getting a full stomach,” says Savannah Amberson, a vet tech and Eli’s owner. And they’re both getting lots of love. “I’ve been getting messages and phone calls at work from people in Ohio, Maine, California, Oregon, Arizona … all over about how Eli’s story was on their news stations and has touched their hearts,”Amberson wrote in a Facebook post.“I’ve never been so thankful and felt so much love.” — Read it at People Pets