July 26, 2016: We've scoured the Web to find the best and most compelling animal stories, videos and photos. And it's all right here. 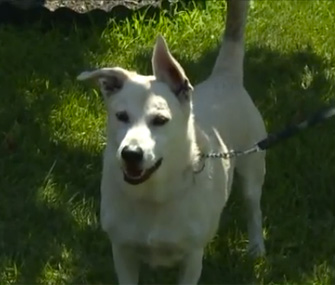 WNEP16 via People Pets
Guy alerted rescuers to his 79-year-old owner, who was stranded on an embankment.

Pennsylvania first responders were searching for a 79-year-old man who’d been stranded in the woods for 12 hours after falling while hiking and striking his head. After three hours of looking, they heard a dog barking. “We stopped at an embankment. We didn't think we would be able to drive up,”Matthew Marsicano of Hazle Township told WNEP16. That’s when the dog appeared. Guy showed the rescuers a safe path to his owner and didn’t leave his owner’s side as they carried him back down the embankment. The man was released from the hospital and reunited with Guy on Friday. — Read it at People Pets

The world’s first attempt to reintroduce animals into an area where they went extinct is underway in Guadeloupe, where fifteen manatees from around the globe are being sent to the French Caribbean island in the hopes that they will thrive. "We have been very successful in breeding manatees in our care for the past 20 years," said Cheng Wen-Haur, deputy chief executive of zoo operator Wildlife Reserves Singapore, who sent two manatees to the island. "We are very happy that this success will now contribute to restocking part of the species' historic range in the Caribbean where it has been extinct for the past century." — Read it at Seeker

A doctor at Washington State University is leading an effort to eradicate rabies in Africa by 2030 — by vaccinating dogs. Though the disease is all but eliminated in America, more than 59,000 people die from rabies worldwide every year, and 99 percent of human rabies infections stem from dog bites. “It’s not rocket science,” says Dr. Guy Palmer. “We have all the tools we need.” — Read it at Seattle Times 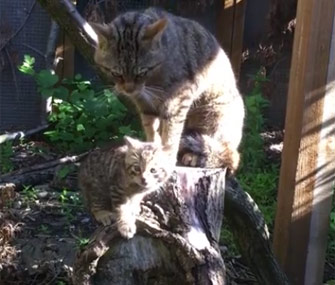 YouTube via ZooBorns
Chester Zoo released a video of its Scottish wildcat kitten emerging from its den for the first time.

Chester Zoo has released amazing footage of its rare Scottish Wildcat emerging from its den for the first time. The cat was born on May 13 and keepers still do not know its sex. Scottish Wildcats are one of the most endangered cat species in the world, with less than 100 left in the wild. — Watch it at Zooborns

A 15-pound lobster caught by fishermen in Sunrise, Florida, ended up at the local Tin Fish Restaurant and was close to becoming someone’s meal. That is, until the owner used a rough formula to figure out the lobster’s age — and calculated it to be 110. News of the centenarian lobster spread on Facebook and several animal rights activists quickly raised $300 to ship the lobster to an aquarium in Maine to live out its remaining days in peace. — Read it at Seeker