March 17, 2016: We've scoured the Web to find the best and most compelling animal stories, videos and photos. And it's all right here. 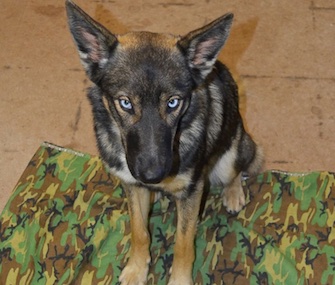 U.S. Navy / Naval Base Coronado
Luna was feared lost at sea before she was found on San Clemente Island in the Pacific.

Lucky Dog to Be Reunited With Owner

On Feb. 10, Nick Haworth was boating with his dog, Luna, two miles off the coast of San Clemente Island when he realized that she was no longer in the boat. “One moment Luna was there and the next she was gone,” Haworth told Navy officials at the time. After a two-day search, Haworth feared the worst, but five weeks later he got the amazing news that Luna was alive and well. She had swum ashore to the naval facility on the island, surprising everyone. The pair will be reunited today. — Read it at the San Diego Union Tribune

No, they’re not headed to bird school, they’re London’s Pigeon Air Patrol, a team of 10 pigeons equipped with backpack sensors to measure air pollution — and tweet the results. "Millions of people die every year around the world from air pollution — it's basically a pandemic, but we have a hard time realizing this because it's largely invisible," said Romain Lacombe, CEO of Plume Labs, who developed the program. "So the Pigeon Patrol has been about making the invisible, visible. And there's a nice parallel there — we don't always think about the fact we breathe about 20 (kilograms)of air every day. Much in the same way that pigeons themselves are all around us, and we rarely notice them." — Read it at CNN

The body of an extinct dog species has been discovered in the permafrost of Tumat, in the Sakha Republic of Russia. Once thawed, scientists performed an autopsy on the 12,400-year-old Pleistocene puppy and found 70 to 80 percent of its brain had been preserved. They also believe the animal was a pet, as it was found near human remains. South Korean scientistHwang Woo-Suk collected samples of the dog’s skin, muscle and cartilage in the hopes of cloning it in the future. — Read it at Discovery News 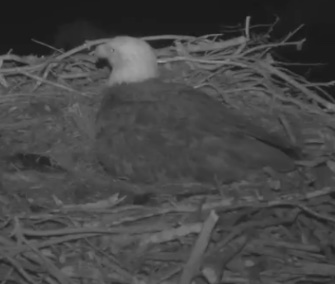 YouTube / Explore.org
A bald eagle mom sits in her nest Thursday morning. Her two chicks hatched on a live webcam.

In California’s Channel Islands, two bald eagle chicks made their debut into the world in front of a live audience. A webcam near their nest caught the birds hatching earlier this week, and viewers can now watch the parents as they take turns caring for their babies. The tiny chicks have a lot of growing to do – as adults, they will have wingspans of more than 7 feet and bodies weighing nearly 14 pounds and will be among North America's largest predatory birds. —Read it and see it at Discovery News

To mark St. Patrick’s Day, we’ll leave you with the story of one more lucky dog: Bound in wire and left for dead in a garbage bag outside a meat market in South Korea, Chi Chi, a golden retriever mix, lost all four of her legs when she was rushed to a vet clinic by an animal rescue group there. After a couple of months of learning to use her prosthetic paws, Chi Chi is headed to her forever home with the Howell family in Arizona. "Maybe she can encourage people who have to have amputations themselves, like soldiers and kids," Richard Howell said. "We want to use her story to make the lives of humans better. I think if we do that, we're doing something positive in the world." — Read it at THV 11