Nov. 1, 2013: We've scoured the Web to find the best and most compelling animal stories, videos and photos. And it's all right here. 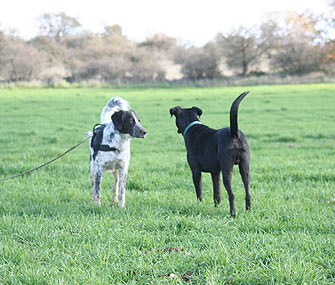 Siniscalchi et al.
A new study finds dogs react to the direction that other dogs wag their tails.

A new study reveals that dogs notice which direction a fellow dog is wagging its tail, and react accordingly. When the dogs in the experiment watched a video of another dog wagging its tail to the right, they remained at ease, with some even approaching the dog on the screen. But when they saw video of a dog swinging its tail to the left, they became more anxious and their heart rates increased. The Italian researchers think both the tail wagging direction and the other dogs’ responses to it could come from their automatic responses rooted in different hemispheres of the brain. “A dog looking to a dog wagging with a bias to the left — and thus showing right-hemisphere activation as if it was experiencing some sort of negative/withdrawal response — would also produce anxious and targeting responses as well as increased cardiac frequency," said researcher Giorgio Vallortigara of the University of Trento. "That is amazing, I think." The findings were published in the journal Current Biology. — Read it at Live Science

When researchers compared a relatively undisturbed group of elephants and one that had been culled and moved as calves, they found the relocated, orphaned animals showed a negative long-term psychological impact that affected their decision making process. The result paralleled post-traumatic stress disorder in humans, researchers said, noting that long-term learning and knowledge transfer in the relocated population was deeply impacted by the culling. "The elephants who had grown up without the benefit of role models respond very differently to threats than do families with an older, experienced matriarch," said biologist and conservationist Joyce Poole, one of the authors of the study, which was published in the journal Frontiers in Zoology. — Read it at National Geographic

After paying between $900 and $1,300 for a Dell Latitude 6430u, many owners are complaining that the machine emits an odor from the keyboard or palm rest that smells like cat urine. "The machine is great, but it smells as if it was assembled near a tomcat's litter box," wrote one customer in an online Dell forum. Another said he felt awful for mistakenly scolding his elderly cat, who he thought was peeing on the computer. At first, Dell told customers to try cleaning their keyboards with a soft cloth or compressed air. But on Thursday, the company said the scent is related to a manufacturing process that has since been fixed, and affected customers should contact the company to have their palm rest assembly replaced. — Read it from AP via MSN 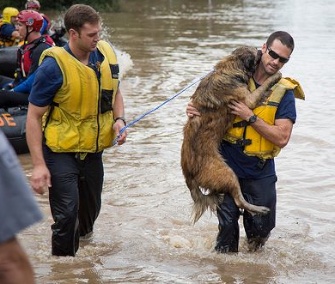 Fire crews in Austin, Texas, have been helping to evacuate 1,100 homes after a fall storm dropped 15 inches of rain on the region, resulting in widespread flooding. This sweet picture by photographer Preston Culver captured firefighters Matt Harvey and Michael Cooper rescuing a dog from the flooding. “We don't just rescue two-legged victims … we love our four-legged friends as well,” the Austin Fire Department said when it shared the photo on it Facebook page on Thursday. — Read it at the Huffington Post

Guests at Walt Disney World’s Animal Kingdom Lodge were treated to a special attraction recently, when a baby Hartmann’s mountain zebra was born on the resort’s savanna. Travelers there are able to see the new filly roaming with her mom. The Hartmann’s mountain zebra is listed as vulnerable on the IUCN’s red list of threatened species. — See photos from the Disney Parks Blog

* How to Stop Your Dog From Peeing in the House