April 21, 2017: We've scoured the Web to find the best and most compelling animal stories, videos and photos. And it's all right here. 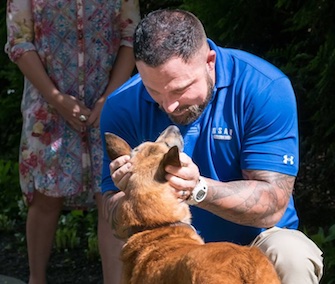 Three years after he last saw her, Air Force Staff Sgt. Adam Wylie was reunited with Emra, the Belgian Malinois he handled while he was stationed in South Korea. Wylie said he thought of Emra as a person while they worked 12-hour shifts together, and he and his family are thrilled to adopt the 9-year-old dog as she retires from the military. Wylie was tearful when he finally got to see Emra on Thursday in Cincinnati, with the help of the non-profit American Humane Association. “I can’t express how happy I am right now to see her,” Wylie said. “I’m just so thankful.” — Watch it at the Cincinnati Enquirer

Researchers from Cornell University set up 120 pristine honeybee colonies near 30 New York state apple orchards and allowed the bees to forage for several days before examining their “beebread,” which is the place where they store food gathered from pollen. They found acute levels of pesticides in 17 percent of the colonies, and chronic exposure in another 73 percent. "Our data suggest pesticides are migrating through space and time," said lead author Scott McArt. He explained that bees may be gathering pollen from nontarget wildflowers and weeds like dandelions where pesticides seem to linger. The study was published in the journal Nature Scientific Reports. — Read it at Phys.org

If you’re looking for a date these days, you might turn to a web site like eHarmony or Match.com. Now, a new site called How I Met My Dog matches people and potential pets based on personality, lifestyle and behavior — rather than just appearance and breed, which is how dogs are often selected, the founders say. After a person seeking a dog fills out a profile, the site matches them with shelter dogs. So far, the service is only available in the Boston area, but the hope is to take it national later this year. — Read it from the AP via U.S. News 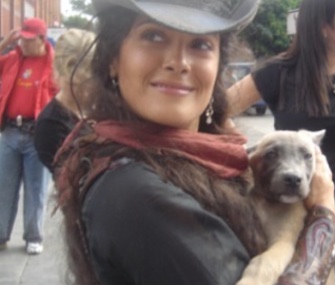 Instagram / salmahayek
Actress Salma Hayek shared this photo with Blue in a tribute to him on Instagram.

Actress Salma Hayek turned to Instagram last week to post a heartfelt tribute to her late dog, Blue. “My blue's body died yesterday. I understand he is in a better place but my eyes cry anyway,” she wrote. Two weeks ago, Hayek had said she was relieved that Blue was “bouncing back from a very rare autoimmune disease” thanks to an experimental treatment. Just last year, Hayek lost another dog, Mozart, who was shot on her ranch. Thankfully, this dog lover has several other pooches at home to comfort her as she copes with her loss. — Read it at People Pets

It’s polar bear cub season, and we’re soaking up all the adorable photos of the fuzzy white bears we can as they emerge from their dens! Yesterday, we told you about three cubs who made their debut at the Columbus Zoo. Now, there are photos of two 6-month-old sisters who have been entertaining visitors to the Aalborg Zoo in Denmark with their antics. The twins played, snuggled and slept curled up next to their mom, Malik, as zoo guests watched. — See photos at Zooborns