June 26, 2015: We've scoured the Web to find the best and most compelling animal stories, videos and photos. And it's all right here. 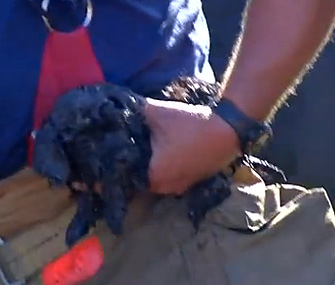 When Bailey, a 3-month-old teacup terrier in Buffalo, New York, found herself trapped in a exposed vent pipe, firefighters and city workers came to the rescue. Crews, working for hours, used large equipment to dig a hole more than six feet deep in order to pull the puppy out safely. "Some people might think we went over and above, but that's what our guys do every day," Buffalo Fire Commissioner Garnell Whitfield told WIVB. “We're very grateful there was a happy ending. We're very satisfied."Bailey’s owner is too. “I love Buffalo firefighters, I love Buffalo police, I love all of y'all,” she said, holding back tears.— Read it and see it at People Pets

Oslo’s new bee highway — a path through the city that includes flower-adorned cemeteries and rooftop gardens and balconies — will give bees a safe passage through the city. Although Norwegian bees may not be as seriously threatened by intensive agriculture and pesticides as bees in the U.S. or other European countries, a third of the country's 200 wild bee species are nonetheless considered endangered, and Oslo is hoping to create an example for others to follow. "If we manage to solve a global problem locally it's conceivable that this local solution will work elsewhere too," said Norway garden owner Agnes Lyche Melvaer. — Read it at Discovery News

The owners of a Houston, Texas, ranch are being charged with animal cruelty after authorities determined their horses were starving and seized all 200 from the farm. “Our veterinary teams and cruelty investigators are conducting initial assessments of [the] horses,” the Houston SPCA’s director of special projects Stacy Fox said, as reported by the Houston Chronicle. “Many of the horses are emaciated, in need of hoof care and suffering from bloody, open wounds.” While the owners blame their staff, one staff member said the owners couldn’t afford enough feed and she sometimes bought it herself.— Read it at CBS Houston 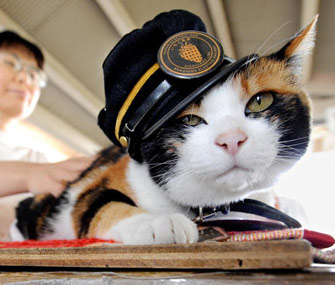 Toru Yamanaka, Getty Images
Tama, who was credited with helping to save Japan's Kishi train station, has died at the age of 16.

Tama, the cat in Japan credited with saving a Kishi train station from financial ruin, died Monday from acute heart failure. Tourists would come to the station to see her hanging out in her office — a converted ticket booth — wearing a railway hat and collar, and she had a noticeable impact. "The number of passengers on the line jumped to 2.27 million in fiscal 2014 from 1.92 million in fiscal 2005," the Kyodo News reported. "Photos of Tama and other merchandise also sold well, leading to her appointment to acting president of Wakayama Electric Railway in January 2013." A memorial service is set for Sunday. — Read it at NPR

16-year-old Bindi Irwin, daughter of the late Crocodile Hunter Steve Irwin, revealed in an interview that there is one animal that terrifies her: bees. "When I was about 2 years old, I found a bee that had been stepped on on the foot path, and so I picked it up to rescue it, and it stung me on the hand," Bindi told People magazine. "From that day forward, I've been terrified of bees."— Read it at the People Pets