Feb. 26, 2015: We've scoured the Web to find the best and most compelling animal stories, videos and photos. And it's all right here. 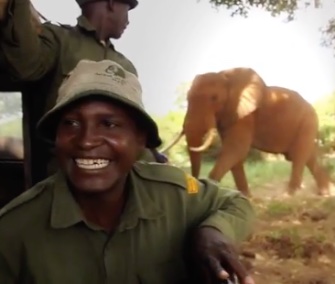 
Wildlife filmmakers working in Kenya suspected that the wild bull drinking their fresh shower water may have been a former orphan who’d been cared for by the David Sheldrick Wildlife Trust. So, earlier this month they asked two longtime keepers from the trust to visit and identify him. It turned out that they were right. The elated keepers confirmed that the elephant was Ndume, who was rescued at 3 months old in 1989, after he was injured by tribesmen protecting their crops. When he heard his keepers’ voices, Ndume, 26, “stood stock still for a few moments and then approached the vehicle in which the keepers were sitting with a low welcoming rumble,” the trust said in an update. “This is fantastic. It’s unbelievable to have seen him now,” says delighted head keeper Joseph Sauni in footage of the visit. “He’s very much OK. I’m very, very, very much happy — fantastic to see him alive. ... This is the greatest present that we’ve worked for, this day and Ndume.” — Read it and watch it from the David Sheldrick Wildlife Trust

In American Kennel Club rankings set to be released today, the Labrador Retriever continues its record-breaking reign at the top. But the Bulldog made news as it hit a new high at No. 4 on the list. The French Bulldog also appeared in the top 10 list for the first time in nearly 100 years. The other breeds that made up the top 10 included German Shepherds, Golden Retrievers, Beagles, Yorkshire Terriers, Poodles, Boxers and Rottweilers. The Dachshund fell to No. 11. The rankings are based on the number of AKC registrations for each breed. — Read it from AP via ABC News

Conservationists applauded a move by SeaWorld Orlando to stop what they believe was the last large-scale program that allowed guests to hand-feed dolphins. "It’s out of date, out of style and it’s full of risk," said Courtney Vail, campaign and program manager for the Whale and Dolphin Conservation Society. She said dolphins have been harmed in feeding programs by fighting over food and by guests dropping other objects into pools. SeaWorld’s parks in San Diego and San Antonio have ended their feeding programs in the last three years, but feeding dolphins is still part of the program at its sister park Discovery Cove in Orlando. — Read it from Reuters via Yahoo 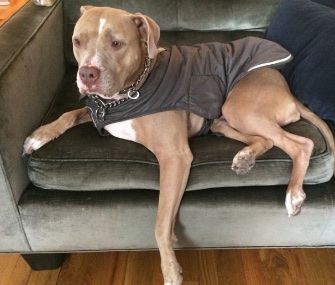 Morgan Bogle / Instagram
A $5,000 reward is being offered for the safe return of Sugar, a 4-year-old Pit Bull mix who was lost in New York.

Morgan Bogle is desperately searching for her adopted 4-year-old Pit Bull mix, Sugar, after her dog walker lost the pooch Monday morning in New York City’s East Village. Bogle had left the dog in the dog walker’s care while she went on a business trip to London. She got a call from a neighbor saying the dog walker was having a “meltdown” and knocking on all the doors in her apartment building looking for Sugar. “I am numb and devastated and I don't know what to do to get her back,” said Bogle. "Her collar, her leash and her coat were found in the dog walker's apartment so he either left without her being suited up or left her somewhere and took all of her stuff home.” A $5,000 reward is being offered for Sugar’s safe return. — Read it at New York’s WABC