April 14, 2017: We've scoured the Web to find the best and most compelling animal stories, videos and photos. And it's all right here. 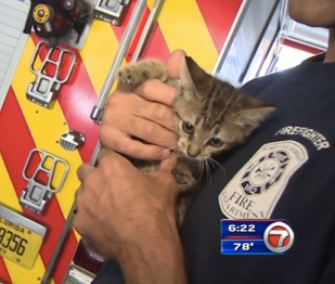 7 News Miami
Fourt Lauderdale firefighter Eric Fillyaw adopted the kitten he found in the engine of a Porsche.

This is one little kitten with a taste for luxury. David Burch had just bought a 2016 Porsche Cayenne SUV when he thought he heard a kitten purring. At first, he assumed it must have been outside the vehicle, but when it continued, he realized it was coming from his new twin turbo engine. He parked in the Galleria Mall parking garage and called Fort Lauderdale, Florida, Fire Rescue for help. “This can’t be for real. It’s not happening to me. I just got the car,” Burch said. “They wanted to hear it to make sure I wasn’t hallucinating.” The crew took apart the engine of the $100,000 vehicle, and managed to free the kitten — who wasn’t exactly pleased about it. She soon warmed up to her rescuers, though, and firefighter Eric Fillyaw decided to bring her home for his 3-year-old daughter. The kitten’s new name? Porsche. — Watch it at 7 News Miami

Panda Pair Arrives in the Netherlands

On Wednesday, the Ouwehands Dierenpark zoo in the Netherlands finally got the two black-and-white residents they’d spent 16 years waiting for: pandas Xing Ya and Wu Wen. The bears are staying in quarantine, but the zoo says their first night at their new home went well. The pair will be living in a brankd new $7.4 million compound that was built in a traditional Chinese style. The pandas are on loan to the zoo from China for 15 years, and their keepers are hopeful that they’ll start a family while they’re there. — Watch it at the Huffington Post

It’s pup season on the West Coast, and the Marine Mammal Center is reminding beachgoers that they need to stay at least 50 feet away from stranded seal or sea lion pups. “Please remember, pups and selfies don't mix. We know it's a once-in-a-lifetime pic. We get it. And you'll ‘be real quick,’” the rescue center said in a Facebook post this week. “What you don't know is the pup's mom is just offshore. She sees you even if you don't see her. And she will now abandon the pup.” If you do spot a marine mammal you think has been stranded, call the center’s stranding hotline: 415-289-SEAL. — Read it at The Marine Mammal Center’s Facebook 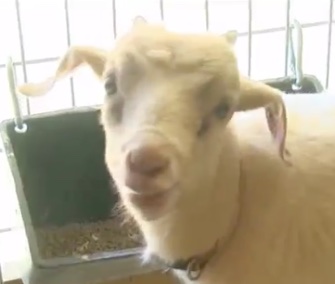 Arkansas Matters
Speedy the goat saved his family from a fire just two days after they got him.

Nick Bruce wasn’t thrilled when his daughter, Abigail, got a goat as an early 10th birthday gift last Thursday. But just two days later, Speedy won a place in his heart when he saved his new family from a fire in their Arkansas home. Speedy woke Abigail up at 1 a.m. “It was bouncing on me and screaming,” and that’s when she noticed smoke in her room. She ran to tell her dad. “I'm glad we got it before the fire happened or we wouldn't be here,” said Abigail. Her dad agrees. “He is not going anywhere!” he said. The family is now staying at a friend’s house until they can get back on their feet. — Watch it at Arkansas Matters

There’s good news for the cat who quickly became famous when he interrupted a Miami Marlins baseball game on Opening Day: The skittish cat has been adopted by an employee of the team. The gray kitty was affectionately known as #RallyCat, and video of the cat scampering around the outfield and onto a sculpture in the park went viral. Maybe the cat did bring the team good luck — they won their opener against the Atlanta Braves, but lost a 15-inning game to the New York Mets at the park last night. — Read it at CBS Miami