March 31, 2017: We've scoured the Web to find the best and most compelling animal stories, videos and photos. And it's all right here. 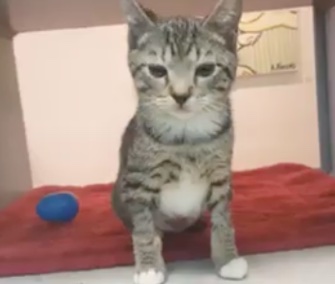 Louisiana SPCA / Facebook
Buoy the kitten was saved from the Mississippi River by a construction worker.

Buoy the Kitten Survives in River

More than a month after she was rescued, barely breathing, from the Mississippi River in New Orleans, Buoy the miracle kitten is ready for a new home. The 3-month-old kitten was found floating in the river by a construction worker who rushed her to the Louisiana SPCA. “If her rescuer hadn’t spotted her, the poor kitten would never have survived,” said the shelter’s CEO, Ana Zorilla. “We didn’t think she would make it through the night but she surprised us all.” Buoy bounced back after being treated for hypothermia and having surgery to amputate her tail and one hind leg. After spending time recovering in a foster home, she’s up for adoption at the shelter. — Read it at New Orleans’ WWLTV

Study: Birds Who Crash Into Cars Tend to Have Smaller Brains

New research shows that birds who get killed by cars tend to have smaller brains relative to their body size than those who avoid getting hit. For example, crows have big brains relative to their size and have shown the ability to navigate safely through traffic. “I don't know if we can say they are 'smarter,' but they do exhibit cognitive behaviour that makes them likely to survive,” said lead author Anders Pape Moller, an evolutionary biologist at the French National Center for Scientific Research. Pigeons, however, who have much smaller brains, seem less adept at avoiding collisions with cars. The study was published in the journal Royal Society Open Science. — Read it at Seeker

A fluffy zebra foal who escaped an attack by local dogs in a Kenyan village managed to run toward ranch workers, who called the David Sheldrick Wildlife Trust for help. A vet gently cleaned up the 2-week-old zebra, sprayed his wounds with an antibiotic and gave him anti-inflammatory medication, but decided he was well enough to be released to a nearby group of zebras. Luckily, he was quickly adopted by a lactating female, said the Trust in a Facebook post this week. — See photos from The David Sheldrick Wildlife Trust’s Facebook 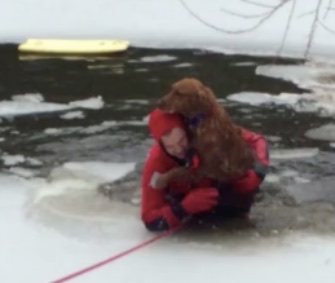 GMA / Yahoo
Emmett, a 3-year-old Golden Retriever, was rescued from an icy pond in his backyard.

Firefighters from North Hampton Fire and Rescue in New Hampshire pulled a 3-year-old Golden Retriever from a frozen pond in his backyard on Wednesday morning. Emmett was running in his yard when he fell through the ice, and his owner called 911 after a family member attempted to go into the pond to rescue the dog. A firefighter wearing a water rescue suit picked Emmett up out of the water and the two were pulled back to shore on a tethered rope. “The dog could definitely tell we were there to help,” said Deputy Fire Chief Jason Lajoie. “He was very friendly and you could tell he was very thankful.” Emmett was treated for mild hypothermia at an animal hospital and released to his family a few hours later. — Read it at GMA via Yahoo

Nearly 200 dogs have been nominated for the 2017 American Hero Dog Awards, and the first round of voting for finalists in seven categories opened this week. You can vote once per day for your favorite nominee. The seven categories include law enforcement/arson dogs, military dogs, therapy dogs, service dogs, emerging hero dogs, search and rescue dogs and guide/hearing dogs. The winning dog in each category will be flown to Los Angeles for a star-studded gala in September, and this year’s American Hero Dog will be revealed. The 2016 American Hero Dog winner was Hooch, a 3-year-old Mastiff who was rescued from terrible abuse and went on to work with abused and special needs children. — Cast your vote at American Humane