September 8, 2015: We've scoured the Web to find the best and most compelling animal stories, videos and photos. And it's all right here. 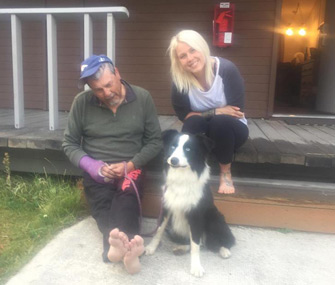 Owner: Reunion was a "Hugfest"

A car crash in Yellowstone in late July left Dave Sowers and his girlfriend Laura Gillice seriously injured — and heartbroken when they learned that Jade, Sowers' 18-month-old Australian Shepherd, had bolted from park rangers into the wild. With the help of locals near Canyon Village, Montana, Gillice searched for the dog, taking her Australian Shepherd, Leila, on walks and encouraging the dog to bark in the hope that Jade would hear her friend and come running. Other efforts to entice Jade included leaving out blankets and clothes with Gillice's and Sowers’ scents on them, playing recordings of Sowers’ voice on cellphones and speakers and live traps with wet dog food placed by park rangers. These efforts finally paid off this past weekend, 42 days after the accident, when Jade came bounding to Gillice through a meadow. “A lot of people have just dedicated their weekends to looking for her,” Sowers says. “It’s amazing, we didn’t think we’d ever see her again.” — Read it at the Star Tribune

Rescuers on Lookout for Entangled Whale

A large blue whale entangled in hundreds of feet of fishing line is believed to now be off the coast of Mexico —more than a hundred miles south of where a group of whale watchers first spotted her and tried to help a few days earlier. Rescuers tried to free the whale from the line on Sunday but were unsuccessful. "We would have loved to cut it all off and free the whale but sometimes things are impossible and it endangers the rescuers as we're doing it," said Peter Wallerstein of Marine Animal Rescue. "It could ram us, it could hit us with its tail, it could do some major damage. It's a really, really dangerous situation." When they were unable to free the whale, the crew attached a buoy to the entangled line. Now, the U.S. Coast Guard, whale watching boats and pilots are keeping a close eye on the ocean. "Hopefully we'll get more reports and finish the job," said Wallerstein. — Read it at CBS

A group of Labrador Retrievers and Border Collies has been specially trained to corral cattle, carry buckets or other tools and open gates, in order to help farmers with disabilities keep their farms running. Since 2009, PHARM Dog USA has matched 10 dogs with farmers, free of charge, and two more are currently being trained. Participating dogs are donated or rescued from shelters and the cost of their training is covered by agriculture rehabilitation groups. “People think of farmers as rugged and tough,” PHARM Dog USA founder Jackie Allenbrand told the Associated Press. “When you see a big, burly farmer crying after they get a dog because they know they can keep farming, you see what a difference it’s making. That’s what drives us.” — Read it at People 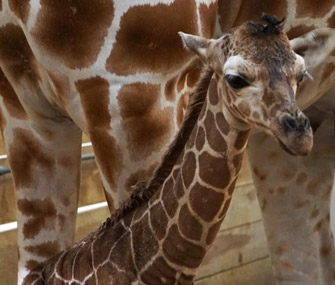 A reticulated giraffe, born August 24, made her public debut at the Como Zoo in Saint Paul, Minnesota. Clover, the 19th giraffe born at the zoo in the last 22 years, stands at 5 feet 8 inches tall and weighs 135 pounds. Reticulated giraffes are listed as "Vulnerable” on theIUCN Red List of Threatened Species. — Read it at Zooborns

Chris Spears and his service dog Rossi, a Czech German Shepherd, worked side by side for four and a half years while serving in the Navy. In 2009, the dog, who Spears refers to as "rockstar," saved his handler's life. Rossi, sensing that something was wrong, woke Spears in the middle of the night. “As soon as we walked out the door, the tent next to us was blown to smithereens,” Spears recounted. But the two were separated when Spears, now 32, finished his tour in Afghanistan and Rossi was paired with another serviceman. “I always told myself I would not get attached,” Spears said. “Boy was that a lie. I fell in love. I fell hard.”The two were reunited in Chicago at Midway International Airport on Friday —and Spears says the hard-working dog is going to finally be getting the break he deserves. “He’s going to lay on the couch,” he says. — Read it at NBC Chicago