April 10, 2017: We've scoured the Web to find the best and most compelling animal stories, videos and photos. And it's all right here. 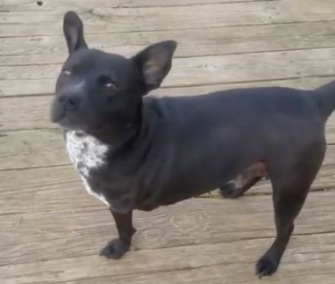 ABC News
Mom "Miracle" moved her puppies to a safe place just before a fire in the abandoned factory were they'd been living.

It was December when a Good Samaritan found a Pit Bull mix on a road in South Carolina, close to the abandoned factory where she’d been living. That same day, the empty factory caught fire. “They took her to animal control and realized she had a broken front left leg and knew she was still producing milk, so she had puppies somewhere,” said Victoria McGonigal, owner of Dochas n Gra Animal Rescue and Sanctuary. Animal control called the local fire department to ask about returning to the site to look for the dog’s puppies, but it was four days until the area was safe enough to go back. When they did, the mama dog led animal control straight to the wooded spot where she’d moved her puppies. All six were safe and sound, and the rescuers believe the dog they named Miracle had broken her shoulder while moving each puppy out of the factory. Her leg was later amputated and she’s recovered. The puppies stayed with their mom until recently, when they were ready for adoption, and now their hero mom is ready for a forever home, too. — Watch it at ABC News

A wide-eyed meerkat pup is getting lots of TLC at the Cango Wildlife Ranch in South Africa after his mom was struck and killed by a car. A man who was afraid the pup would be hit, too, caught him and brought him straight to the ranch for help. There, the keepers named the 6 to 8 week old pup Scout, and has been getting around-the-clock care at the facility’s Animal Care Center. He’s formed bonds with his caregivers, who are working to instill natural meerkat behavior in the little one. Scout will live at the ranch’s meerkat exhibit indefinitely. — See photos at Zooborns

Study: Puffin Couples Who Migrate Together Have More Chicks

Puffins are long-lived, monogamous birds who migrate long distances to wintering grounds. A new study that tracked 12 puffin pairs found that those mates who followed similar migration routes bred earlier and more successfully the following spring, showing a clear benefit for puffins to migrate close to their mates. The Oxford University study was published in the journal Marine Ecology Progress Series. — Read it at Phys.org 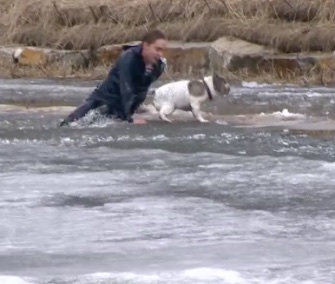 CTV Edmonton
Duncan McIver raced into an icy pond to save his dog, Cosmo.

Duncan McIver of Alberta, Canada, didn’t hesitate to race into an icy, slushy pond when his small dog fell in and started to struggle on Saturday. “As soon as the ice broke, I just went right in,” McIver said. “I think most people would do the same for their dog.” He and Cosmo made it safely back to shore and climbed out. A reporter and crew from CTV Edmonton had just set up their camera for a story on ice safety when the incident happened, and they caught the dramatic scene on video. Authorities always advise dog owners not to go in after their animals in this situation and to call for help because they’d put their own lives at risk, but McIver said he had no regrets. “It wouldn’t be much of a life if I had to watch my dog drown, you know?” — Watch it at the New York Daily News

An adorable new member of the West York Borough Police Department in Pennsylvania took the oath of office last week. The department will soon be training Detective Prince, a 13-week-old Bloodhound, to locate missing people. “We will essentially be attached at the hip, and we'll be available 24 hours a day, 7 days a week for any missing persons,” said Prince’s partner, Officer Scott Musselman, reported Pennsylvania’s Fox 43. The duo will be training for eight weeks before the new K9 officer is ready to get to work. Prince will eventually take the spot of Lou, a Bloodhound who’s been on the force since 2008 and is getting ready to retire. — Watch it at USA Today