Dec. 13, 2016: We've scoured the Web to find the best and most compelling animal stories, videos and photos. And it's all right here. 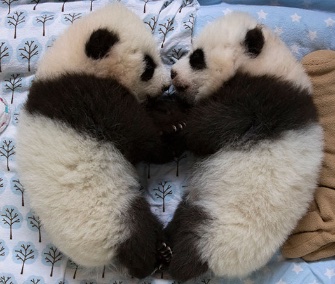 Following Chinese tradition, Zoo Atlanta named its twin panda cubs on Monday, 100 days after their birth. With the help of thousands of voters from around the world, the female cubs were named Ya Lun and Xi Lun. Ya means “elegant,” while Xi means “joy” — and Lun honors their mom, Lun Lun. The cubs are the second set of twins for Lun Lun and dad Yang Yang. Their twin sisters Mei Lun and Mei Huan were the first set of panda twins to survive in the U.S. They’re now 3 years old and recently moved to the Chengdu Research Base in China, where they joined their three other siblings, Mei Lan, Xi Lan and Po. The adorable baby bears are expected to make their public debut later this month or next month. — Read it from Reuters via Yahoo

A spider species discovered in India has been named Eriovixia gryffindori because its unusual shape reminded the researchers who found it of the magical sorting hat from the Harry Potter books. When the hat was placed on a new student’s head at Hogwarts, it would come to life and determine which house the young wizard would belong to. The hat was originally owned by Godric Gryffindor, hence the Gryffindor reference in the spider’s name. The scientists said the hat shape helps the spider blend in with dried leaves so it can protect itself from predators in the Kan forest of the Western Ghats, a mountainous region in southwest India. The new species was described in the Indian Journal of Arachnology. — See photo at Seeker

There’s sad news for Santa Claus. New research suggests reindeer populations in northern Russia are falling, and separate studies have found that the animals’ numbers are dropping in other parts of the Arctic, too. “The reindeer population in the world, and caribou, are declining pretty rapidly,” study co-author Andrey Petrov, a geographer at the University of Northern Iowa, said at a news briefing at the annual American Geophysical Union Meeting on Monday. “We don't know why it's happening,” but climate change seems to play a role. “Rivers that are historically frozen solid were melting earlier in the season,” Petrov said. “They have to swim across open rivers. That's one of the reasons we believe the population is declining.” — Read it at Live Science 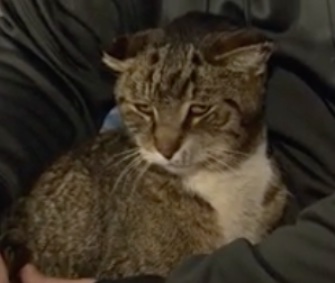 CBC News
Named for the train where he was found, Q199 or Q for short, seems quite content with his rescuer.

When their freight train to Edmonton, Canada, was delayed in bitter cold temperatures on Sunday morning, conductor Brian Slater and engineer William Munsey decided to inspect the engines in the morning darkness. That’s when Slater spotted a cat under one of the engines, frozen in snow and ice. Not sure the cat would survive, Slater called to him, and the cat jumped right into his arms. The two warmed the cat up, fed him and brought him along for the ride to Edmonton. “Within five hours it was curled up on his lap … he was pushing his face against Brad's arm,” Munsey said.“It was almost as if it knew how close it had been to dying and knew exactly which human had saved it.” Slater named the cat Q199 after the train, or Q for short. Q is recovering at Slater’s home, where they also have the company of his wife and their three other cats. — Read Canada’s CBC News

We’ll leave you with another rescue story from Canada. Firefighters in Shediac, New Brunswick, spotted a 530-pound female moose who’d fallen through the ice about 25 feet from shore on Saturday. First, they broke up the ice around her, letting her feet sink to the bottom so she could stand on her own. Then, they created a channel through the ice to the shore, so she could get out on her own. Once that was ready, the firefighters encouraged the moose to come toward the shore, and from there, she took off into the woods on her own. — Watch it at Canada’s Global News