June 15, 2016: We've scoured the Web to find the best and most compelling animal stories, videos and photos. And it's all right here. 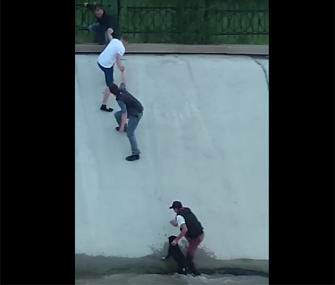 YouTube via People Pets
A group of bystanders formed a human chain to rescue a dog from a reservoir.

When a dog was spotted struggling in the Sayran reservoir in southeastern Kazakhstan, a group of bystanders sprung to action, forming a human chain to reach the dog and lift him to safety. The heartwarming moment was captured on video by Marjana Khadreeva, who watched the scene unfold. — Watch it at People Pets

The Baltimore National Aquarium is moving its eight bottlenose dolphins from their tank to a new — and the nation’s first — seaside sanctuary. This outdoor, enclosed sea water habitat will closely mimic the dolphins' natural habitat and give them more room than they currently have. “Although this decision is about a group of dolphins, it is every bit as much about our humanity; for the way a society treats the animals with whom it shares this planet speaks volumes about us,” said the aquarium’s CEO, John Racnelli.— Read it at The Huffington Post

A new study indicates that cats seem to understand the principles of cause and effect, as well as some elements of physics. Using a container and a rattling sound, Japanese researchers tested cats to determine if they could predict whether the container held an object based on the sound the container made while shaken. If the cats heard a rattling sound, they looked at the container longer, expecting an object to come out when it was turned upside down. "Cats use a causal-logical understanding of noise or sounds to predict the appearance of invisible objects," said Saho Takagi, who led the study. The study was published the journal Animal Cognition. — Read it at Science Daily 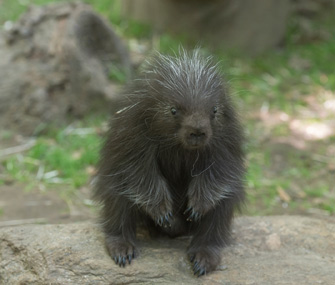 Julie Larsen Maher © WCS
A cute male porcupette recently made his debut at the Children's Zoo in the Bronx.

Baby Porcupine Debuts in the Bronx

An adorable male porcupette born in April is now on display at the Children’s Zoo in the Bronx. Born to mother Alice and father Patrick, he is the fourth offspring of the pair. Though not endangered, the North American porcupine is threatened by hunting and habitat loss. — Read it at Zooborns

A cat found on a charter yacht from Harris, Scotland to Oban—more than 100 miles— now needs a lift back home. “Through Facebook we have discovered that she is part of a feral colony that has been spayed and neutered by the fishermen on Harris who feed them and in return the cats keep down the mice and rat population!” reads a Facebook post from Argyll Animal Aid, who took the cat in. They’re hopeful a volunteer can at least get her to the ferry headed back to Harris. “It would be really nice to get her back to her colony that she knows, it’s her family at the end of the day. Hopefully we will get somebody going up that way who wouldn’t mind taking her.” — Read it at People Pets