Feb. 21, 2017: We've scoured the Web to find the best and most compelling animal stories, videos and photos. And it's all right here. 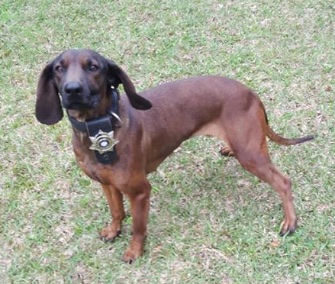 Sheriff’s deputies canvassed an area in Louisiana for hours on Valentine’s Day, searching for a 14-year-old boy with autism who’d disappeared. When they didn’t have any luck, they called in Freya, a Bavarian mountain hound, and her handler, Deputy Ron Olivier. “K-9 Freya, who specializes in finding lost children, took the scent from the missing child’s clothes, and started searching. After approximately twenty minutes, K-9 Freya found the missing child, curled up, hiding in the woods,” the St. Tammany Parish Sheriff’s Office wrote in a Facebook post on Wednesday. The boy was scared but in good health, and the department called Freya a hero for her work. — Read it at People Pets

When the animal care team at the Cincinnati Zoo was having trouble giving its premature hippo, Fiona, an IV for fluids, they turned to their neighbors — the experts at the Cincinnati Children’s Hospital. The hospital, which is experienced in working with preemies, sent over two members of its vascular access team to help. The team used its sensitive ultrasound equipment to place an IV catheter in a deep leg vein, and it’s stayed in place since Friday afternoon, helping to rehydrate the baby, who was born 6 weeks early on Jan. 24. “Five bags of fluid later, Fiona is showing signs of recovery,” said the zoo’s Christina Gorsuch. “She is still sleeping a lot but has started to take bottles again and has periods of carefully supervised activity.” — Read it at USA Today

A Laysan albatross named Wisdom became a mom to her latest chick earlier this month at the Midway Atoll National Wildlife Refuge in the Northwestern Hawaiian Islands. Wisdom, who’s at least 66 years old, is the world’s oldest known breeding bird in the wild. “Wisdom continues to inspire people around the world,” said Bob Peyton of the U.S. Fish and Wildlife Service. Wisdom is quite the experienced mom. She’s reared between 30 and 35 chicks at the refuge over the last six decades. — Read it at CBS News 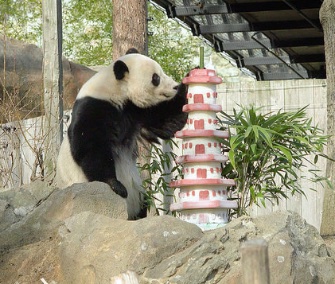 National Zoo / Flickr
Bao Bao enjoys a specially made ice cake on her last day at the National Zoo on Monday.

With spring-like weather in Washington, D.C., over the long weekend, 3-year-old Bao Bao’s loyal fans from near and far arrived at the National Zoo to wish her well before she departs for China today. The young panda enjoyed lots of treats, including a specially made ice cake in the shape of a Chinese pagoda, in honor of her new home. Bao Bao’s parents are on loan to the zoo from China, under an agreement that any offspring be returned to the country before they turn 4. A veterinarian and a keeper from the zoo who held Bao Bao when she was just a day old will accompany her on the 16-hour nonstop flight to her new home aboard the FedEx Panda Express. — Read it at the Washington Post

A 1-year-old calico cat named Gizmo is being credited with saving her sleeping family of five from a fire in their Florida home last week. Ron Perkins was asleep on a couch when an oven mitt on top of a toaster oven caught fire in the kitchen. Gizmo seemed to know what to do. “The cat had her front paws on the cushion, just meowing. She would not stop,” Perkins said. “When I opened my eyes, I realized the house was full of smoke.” Luckily, he was able to put the small fire out before it spread. “The cat definitely saved my life!” Perkins and the rest of the family are now showering their heroic cat with treats. — Read it at Florida’s Fox 13