June 13, 2016: We've scoured the Web to find the best and most compelling animal stories, videos and photos. And it's all right here. 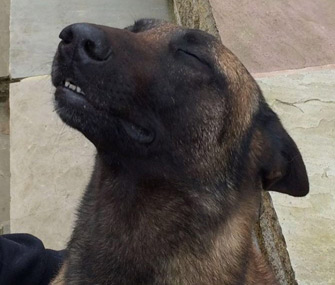 Vinnie, a police dog in Lancashire, England, chased down two suspects who failed to stop for the police. After leaving their van and running across farmland, the trained dog quickly tracked down the first man, who was hiding in a wooded area, and then the second, who was 600 meters away. “Both suspects were later arrested and their van containing a quantity of tools was seized,” the unit wrote on Facebook, with a picture of the proud, grinning pup. “Well done Vinnie.” — Read it at People Pets

Rescued Dog in Viral Photo May Have to Go

Another smiling dog in a viral photo has reason to frown today. Just four days after a posting a pic with his exuberant new rescue dog Diggy, Dan Tillery received a visit from police who said the dog looks like a pit bull and can no longer live in Tillery’s home in Waterford Township, Michigan — a city that has a ban on pit bulls. The catch? Tillery has veterinarian paperwork declaring Diggy an American Bulldog, but a loophole in the town law allows officials to ban any dog that even looks like a pit bull at their own discretion. “This is the craziest ordinance you’ll ever hear in your life,” said Kristina Millman-Rinaldi, executive director ofDetroit Dog Rescue, where Tillery adopted the pup. “Right now we’re waiting to hear back from the township.”— Read it at Huffington Post

Bubbles, SeaWorld’s oldest pilot whale, has died after three decades of living at the San Diego theme park. The whale, thought to be in her 50s, was one of the star attractions at the park’s Dolphin Stadium. "She has inspired and amazed more than 100 million guests for nearly 50 years," said SeaWorld in a statement. "Loved by her trainers and veterinarians, Bubbles had been a member of the SeaWorld family for nearly 30 years." SeaWorld will perform a necropsy to determine the cause of death. — Read it at CNN 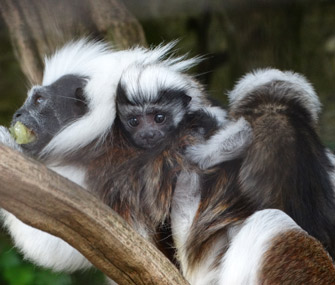 Rare Tamarins Born in the U.K.

Cotswold Wildlife Park and Gardens in the U.K. is celebrating the birth of twin cotton-top Tamarins — just in time for Father's Day. Tamarin malesspend the majority of their time carrying the infants — their mother carries them for the first week of life then holds them only to suckle. These new infants are the second set of twins for father Johnny. Cotton-top tamarins are one of South America’s rarest monkeys. In the wild, they are restricted to a tiny corner of north-west Colombia and are listed as critically endangered.

The first-ever Dog Film Festival, held in New York City in October, was such a success that the creators are taking it on a 12-city national tour. “We are thrilled to help bring the Dog Film Festival tocities across the country,” said Susanne Kogut, executive director ofthePetco Foundation, sponsor of the festival. “We are excited to celebrate with all doglovers during this fun-filled festival andshowcase these wonderfulfilms that demonstrate the positive impact dogs have onpeople’s lives.” Each screening includes documentary, animated and live-action shorts. In addition, a local humane society or shelter in each host city will receive 50 percent of ticket sale, and some cities will have dog-friendly venues. For a list of cities and to buy tickets, visit the Dog Film Festival website.