March 15, 2017: We've scoured the Web to find the best and most compelling animal stories, videos and photos. And it's all right here. 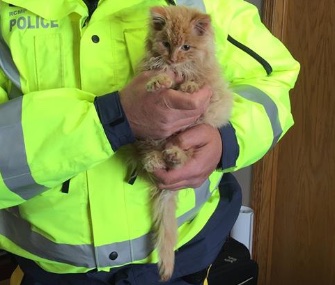 Prairie Animal Health Centre / Facebook
Ambrose the kitten was rescued from a highway in Canada by two police officers.

A pair of Royal Canadian Mounted Police officers were driving on a Saskatchewan highway last week when they swerved to avoid something in the middle of the road. They thought it was a chunk of ice — until they saw it move. They stopped their car once they realized it was an animal, and got out to investigate. The partially frozen and very vocal kitten knew help had arrived, and started moving toward the officers, who scooped him up and got him to a veterinary clinic. There, he was warmed up, fed and treated for frostbite. One of the kitten’s heroes, Cpr. Sean Chiddenton, was surprised to find a happy and active kitten when he returned later that day to check on him. “He has stolen all our hearts!” the Prairie Animal Health Centre wrote in a Facebook post. The fluffy kitten has been named Ambrose, and is now being spoiled by the family who adopted him. — Read it at the Huffington Post

Surveys taken between June and October 2016 identified 147 great white sharks off the coast of Cape Cod, including 89 new sharks that researchers hadn’t seen in previous years. When the survey project began in 2014, only 68 sharks were spotted during the same time period. Still, the jump in the numbers may not mean that the population is growing, warns study leader Gregory Skomal. While there are “positive signs that conservation is working,” it’s possible some of the new sharks may have been missed by previous surveys, he said. — Read it at Live Science

As a late-winter storm brought snow, sleet and wind to Washington, D.C., a pair of nesting bald eagles at the National Arboretum huddled together atop their fragile eggs on Tuesday. The park’s eagle cam captured the duo, named Mr. President and First Lady, sitting on the eggs in their snowy nest together for hours on Tuesday. The First Lady had protected her eggs on Monday night and Tuesday morning before her mate arrived to help her. The eggs are expected to hatch in the last week of March. — Read it from Washington’s WTOP 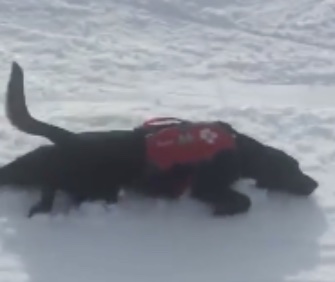 YouTube
Truckee, an avalanche rescue dog, takes a break with a slide down a Lake Tahoe mountain.

Truckee, a 6-year-old black Labrador Retriever, works hard as the senior dog for the Avalanche Rescue Dog Program at Lake Tahoe’s Heavenly Mountain. But, he plays hard, too. A new viral video shows Truckee doing one of his favorite things: sliding down the mountain on his belly. His trainers say Truckee slides around like this a lot, but this leisurely run might have been his longest yet. — Watch it at Los Angeles’ ABC 7

An 18-month-old sea otter who was just one day old when she was found abandoned on a beach packed her favorite red ball for a move from the Monterey Bay Aquarium in California to the Audubon Aquarium in Louisiana. She’s settling in quite well after a 21-hour journey to her new home. Now, the aquarium is asking the public to weigh in on their new resident’s name. The choices include Ruby, Pearl or Charley. Cast your vote, and the results will be revealed Thursday on the Audubon’s Facebook page. — Read it at People Pets