January 2, 2015: We've scoured the Web to find the best and most compelling animal stories, videos and photos. And it's all right here. 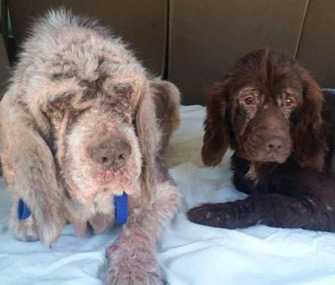 In November, two Cocker Spaniels who showed signs of abuse and neglect were rescued by Angels Among Us Pet Rescue in Atlanta. As they recovered, volunteers noticed that one of the dogs, Drummond, never left the other dog’s side. That’s because the second dog, Denny, has cataracts and can’t see at all — and Drummond acts as his guide. Lance White, the CEO of Angels Among Us Pet Rescue Group, said that Drummond is "younger and he’s really looking out for the older one. We just feel like they’re family.” He also said the two will only be adopted out as a pair. — Read it at ABC News

In another sweet tale, Stormy, a 5-year-old dog suffering from vision loss, was given up by his owners when they couldn’t care for him anymore. "He's made me proud of him every single day for the way he has adapted to life without the people he's known since he was a puppy, after losing his sight," said Katherine Wood, a shelter volunteer who fostered Stormy, while he was waiting for his forever home. "I will be really happy when he finds his forever family, and he will be one of those special dogs I never forget." Three days ago, that dream came true and Stormy found a new family. — Read it at Huffington Post

While most frogs and amphibians lay eggs, a newly described frog species has been found to birth live tadpoles — and is the only known frog to do so. The species is a member of a group of Asian fanged frogs discovered a few decades ago, but recently a scientist walking through an Indonesian rain forest made the live birth discovery when he picked up one of the frogs. "As soon as I picked her up, she squirted tadpoles all over my hand,"said researcher Jim McGuire. The study was published in the journal PLOS ONE. — Read it at Live Science 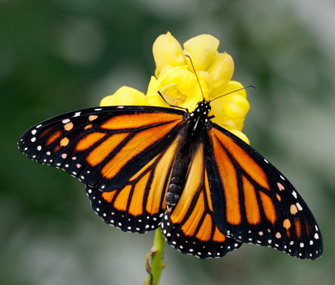 Is the Monarch Butterfly Endangered?

The U.S. Fish and Wildlife Service has announced it will be launching a review to determine whether the monarch butterfly should be protected by the Endangered Species Act. Over the past 20 years, the monarch butterfly population has decreased by an alarming 90 percent, due to pesticides killing off milkweed, the butterflies’ main food source. The review will take up to one year to complete.— Read it at Discovery News

When their dog vanished on Dec. 19, Kendra Brown and her husband Colt created a Facebook page called Bring Penny Home For Christmas. Penny didn’t make it in time for Christmas — but that could be because she was across the country. Someone who saw the Facebook group reported seeing a truck driver pick up Penny; a few days later, the Browns, who live in Washington state, got a phone call from a vet in Pennsylvania, who identified the dog by scanning her microchip. “We’re just really excited that we will be getting her back,” said Kendra. — Read and watch it on Q13 Fox