Jan. 12, 2015: We've scoured the Web to find the best and most compelling animal stories, videos and photos. And it's all right here. 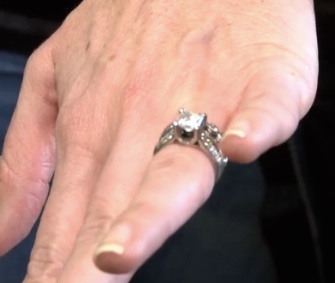 Nothing’s safe when Sierra’s around. The black Labrador Retriever puppy is recovering from surgery after swallowing her owner’s wedding and engagement rings, which are worth $23,000. "I saw my dogs near the coffee table and remembered I'd left my wedding rings sitting on the table," owner Stephanie Lamb told Tulsa, Oklahoma's FOX 23 news last week. "I knew it was Sierra because she's just a little bit of a troublemaker." Dr. Rodney Robards at Southern Hills Veterinary Hospital performed surgery so Sierra’s intestines wouldn’t be damaged by the jewelry. During the surgery, he also discovered the dog had eaten rocks and sticks. Sierra’s now ready to start over with a clean stomach. — Read it at People Pets

Shadow and Wild 1, a pair of endangered California condors, are closely monitored at the wildlife sanctuary where they live in Big Sur. But they somehow managed to mate without anyone knowing — and hatched and raised their chick without anyone spotting it until it was about 9 months old. "This pair of condors is suspected of nesting in a remote portion of the Ventana Wilderness in the Arroyo Seco drainage," the Ventana Wildlife Society said in a statement. "Biologists have never entered the nest because of the area's inaccessibility." Condors are the largest flying birds in North America, and their population totals just 425, including captive and wild birds. — Read it from Reuters via Yahoo


Butterfly Is Half Male, Half Female

A volunteer for Drexel University's Academy of Natural Sciences was working in the butterfly exhibit when he noticed something unusual about one of the butterflies that had just emerged from its chrysalis. The butterfly had wings on one side that had the coloration of a female, and on the other side, its wings had the colors of a male. The butterfly was found to be bilaterally gynandromorphic. "The wings were so dramatically different, it was immediately apparent what it was," Johnson said. "I thought: 'Somebody’s fooling with me. It’s just too perfect.” — Read it at Discovery News 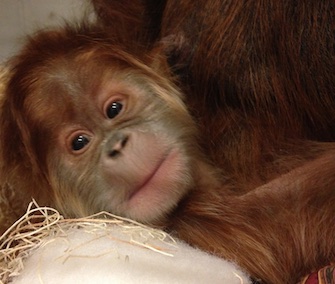 A 1-month-old baby girl at the Saint Louis Zoo in Missouri needs a name — and the zoo wants your help. The critically endangered Sumatran orangutan is the fifth offspring for mom Merah, who’s 45 years old. The baby’s dad is 10-year-old Cinta, who arrived in Saint Louis two years ago from the San Diego Zoo. "Merah is an excellent and experienced mother," said the zoo’s Stephanie Braccini. "She is carrying the infant, facilitating nursing, essentially doing everything right." The great ape care team came up with four possible names for the infant: Lucy, Marigold, Cranberry and Ginger. You can vote until Friday. The baby’s name will be revealed on Jan. 19 at a baby shower for Merah and her little one. — Vote at the Saint Louis Zoo

Austin, Connor and Trevor Bartz started sculpting a sea turtle in their Minnesota front yard before Christmas, and finished it up last week. The result is a 12-foot creature who’s more commonly found in tropical waters. And it’s just the latest in their line of snowy marine animals: In the past, the brothers have created a shark, a walrus and a puffer fish. They've also made a time-lapse video that shows how they crafted their creation. — See photos at Today