March 30, 2017: We've scoured the Web to find the best and most compelling animal stories, videos and photos. And it's all right here. 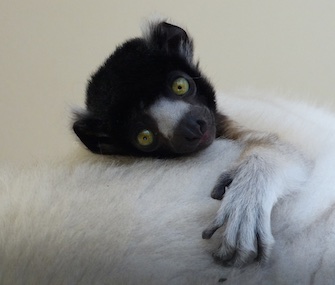 Yousstwo, a Crowned Sifaka, was born in December at the U.K.’s Cotswold Wildlife Park to mom Tahina and dad Bafana. This rare breed of lemur is native to Madagascar. Yousstwo's parents are the only breeding pair of Sifakas in the UK, and his mom is the first hand-reared Sifaka in history to parent-rear her own offspring. Only seven zoos around the world have this rare species. Yousstwo has been in a heated enclosure under his mom’s watchful eye since he was born, but he has now ventured outside and made his public debut. — Get updates from the Cotswold Wildlife Park’s Facebook

A pair of bald eagle parents, Mr. President and The First Lady, made headlines earlier this month as they huddled over their nest at Washington’s National Arboretum during a late winter snowstorm. Well, their hard work and protection has paid off. The first of their eggs hatched on Wednesday morning, and is being referred to as DC4. The pair’s second egg has not hatched yet. Another patriotic pair of D.C. eagles, Justice and Liberty, had an eaglet of their own on March 15. — Read it at Washington’s WTOP

A woman who fell down a cliff in South Australia has her dog to thank for going to get her help. Sue Pethnick, 55, was walking with her Red Heeler, Abby, at a beach camping area on Monday afternoon when she tumbled down a sandy embankment and broke her leg. Abby knew what to do, and returned to the campsite to get the woman’s husband, Michael. “Abby the wonder dog, then led the man back to the cliff face several hundred meters away,” South Australia Police said. Rescue crews arrived to help and Sue was flown by helicopter to a local hospital, where she’s now in stable condition. “She's certainly a little hero now,” Michael said of Abby. He planned to reward his dog with a big bone back at home. — Read it at the U.K.’s BBC News 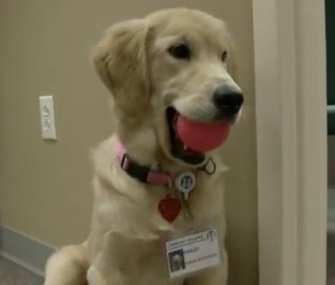 WBIR
Farley, who was named for a teen patient, will be a full-time facility dog at the East Tennessee Children's Hospital.

A dog-loving 16-year-old cancer patient is being remembered at the East Tennessee Children’s Hospital with the arrival of a full-time facility puppy. Kristyn Farley, who passed away last year, used to love visits from volunteer therapy dogs at the hospital, even on her worst days. Now, thanks to help from a grant from PetSmart Charities, the hospital is training a 5-month-old Golden Retriever named in her honor — Farley. She goes to the hospital daily with Sue Wilburn, vice president of human resources, although she won’t be visiting patients until she’s been fully trained, when she’s about a year old. — Watch it at Tennessee’s WBIR

Photographer Lyndsey Wright shot some treasured photos of her friend Leah’s beloved dog Tiger and her family not long before Tiger passed away. A few weeks later, the family added a new member: an English Bulldog named Lolo. Wright, who often photographs newborn babies, told her friend to come right to her studio with her precious puppy. Wright proceeded to photograph the pup just like she does with human infants, cuddled up in soft colors. “It was cracking me up because I found myself soothing her just like a human baby, rocking her, patting her gently, ‘shushing’ her quietly when she wiggled,” Wright said. Lolo had no problem cooperating, peacefully sleeping through some of the session, and resulting in some super-sweet photos. — See photos at People Pets