November 24, 2015: We've scoured the Web to find the best and most compelling animal stories, videos and photos. And it's all right here. 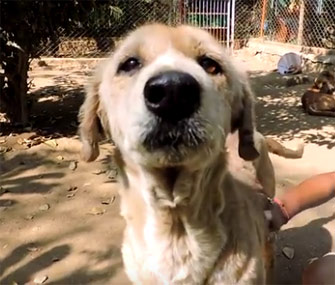 YouTube via The Dodo
Six weeks after her rescue, Alice has a new coat, and a new outlook on life.

Volunteers at Animal Aid Unlimited, a rescue group in India, found a street dog inside the rusty frame of a broken down truck in need of help. Suffering from mange, the dog’s skin was so hard and thick it nearly felt like stone. Using biscuits as rewards, the volunteers got her to the shelter and gently groomed her every day, applying medicated lotion to her skin. Six weeks later, the dog, who they named Alice, is nearly unrecognizable with her new fur and wagging tail. — Read it and watch the video at The Dodo

Denise Thynne was gardening in her home’s backyard in Australia when she was bitten by a deadly red-bellied black snake. Her cat Skitzo wasted no time rushing to her aid. "She came out stalking and it looked like she was mesmerizing it and then she just went in for the kill," Thynne said. Thynne went to the hospital for treatment and was released when doctors were sure the snake hadn’t released its poison in the bite.— Read it at ABC Australia

Dog Stays By Wandering Toddler’s Side

When Amy Dunbar’s 2-year-old son let himself out of the house while she was taking a nap, the family’s Pit Bull, Hazard, went with him. Neighbor Timothy Eff was shocked when he saw the large dog trotting alongside a toddler in a diaper near his home in Toledo, Ohio. “That dog knew that kid was by himself, and protected him to the fullest,” said Eff. “He kind of got between me and the kid, but he didn’t growl. He just let me know that’s his kid. He’s definitely a good dog.” Authorities arrived and reunited the boy with his mother — who has now installed three locks on her doors, the highest one out of reach of her curious son. “I’m just glad my son is safe, and so is my dog,” she said. — Read it at the Toledo Blade 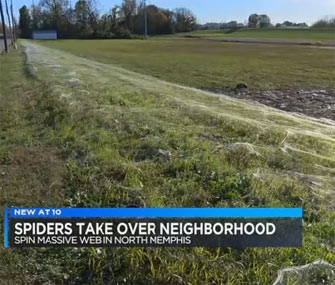 WMC Action News 5
That's not frost on the ground in Tennessee — it's a giant spider web.

Spider Web Covers Half a Mile in Tennessee Suburb

And you thought that one on your porch was big. North Memphis Tennessee residents were intrigued to find a half-mile-long spider web stretching across a field in their suburb. Experts say the culprits are likely sheetweb spider weavers, known to construct messy webs close to the ground to entangle their prey. "In fields and meadows, there are often literally millions of spiders doing their thing, unseen and unappreciated by us,” said Memphis Zoo curator Steve Reichling. “I would not want to live in a world where such things were no longer possible. The presence of these spiders tells us that all is well with nature at thatlocation.”— Read it Discovery News

Move over pizza rat! This one knows how to work a camera. A man was dozing on an NYC platform recently, when he was awoken by a camera flash— from his own cell phone. A rat had decided to make himself at home on the man’s lap, and took a picture of his efforts. The man jumped up and retrieved his phone, and the rat scurried off. Both seemed to recover just fine.— Read it and watch the video at People Pets