June 17, 2016: We've scoured the Web to find the best and most compelling animal stories, videos and photos. And it's all right here. 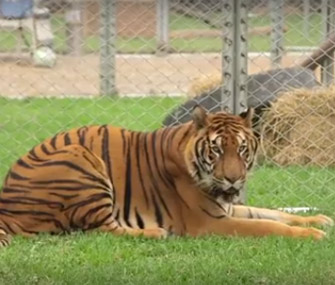 After living in a small cage for his entire life, Hoover the tiger is finally free. Animal Defenders International rescued him from a roadside circus in Peru, where he and 11 other tigers were subjected to daily beatings in their training sessions. Sadly, all the other tigers were perished before they could be rescued. “Hoover was very lucky to survive, his last cage mate had died before we could get to him. We were very grateful for the public support and information that helped us to track the circus down, now he can live in peace in his wonderful new environment,” ADI president Jan Creamer said in a statement. — Read it at People Pets

When fisherman Amir Rahim spotted an olive ridley sea turtle trapped inside a plastic bag in the middle of the Arabian Sea, he wasted no time. Rahim, fully clothed, dove in to the water from his boat to help the animal. As he struggled with the bag, his crew mates stepped in to help cut the debris and they released the now-free turtle back into the water. “Fishermen and other seafarers need to be educatedabout the hazards of throwing plastic stuff into the sea as it may kill a marine animal,” said Rahim. — Watch it at Huffington Post

Japanese researchers are getting closer to understanding the anti-cancer mechanism of naked mole rats, the longest living rodent species. Scientists are hopeful that studying and replicating the mole rats stem cells can be used to derive new tumor-fighting treatments for humans. — Read it at Science Daily 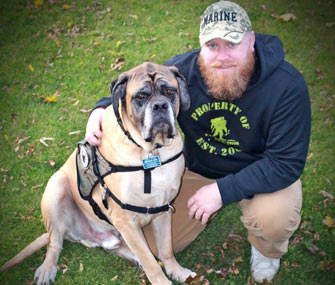 After returning from service in 2010, former marine Tony Austin suffered from PTSD. It was only after he and his wife rescued a Mastiff named Hadji that he learned about service dogs, and they wondered if they should look into getting one. “We were having the conversation about getting rid of him or not, and he was lying on the couch between my wife and I,” Austin says. “I think the next night, or two nights later, was the first night [Hadji] woke me up from a nightmare.”That’s when he decided to train Hadji as his service dog. Now Hadji springs into action whenever Austin needs help or becomes agitated. “Hadji is definitely my four-legged soulmate,” Austin says. — Read it at People Pets

The Australian karrkaratul rarely comes aboveground, so when Kiwirrkurra Rangers spotted one recently they posted pictures and video of the glossy, golden-haired rodent. The blind marsupials live underground and are so elusive that scientists have had trouble classifying their exact behavior or even their appropriate conservation status (marsupial moles are currently classified as endangered). — Read it at CNN