June 25, 2015: We've scoured the Web to find the best and most compelling animal stories, videos and photos. And it's all right here. 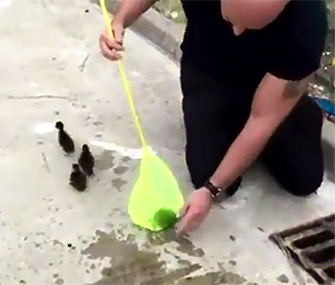 YouTube
Gary Bartoszewski used a children's fishing net to scoop each duckling out of the storm drain.

When Gary Bartoszewski, a British sofa salesman, heard the sounds of a distressed duck flapping and quacking furiously, he ran toward the noise, and found a mama duck calling for her ducklings, who had fallen inside a storm drain. While he waited for firefighters to arrive, Bartoszewski helped the ten ducklings out, one by one, with a child-sized fishing net. The video of the rescue — which shows the freed ducks running toward their relieved mama — has already received more than one million hits on Facebook. — Read it and see it at People Pets


First Turtles Had No Shell

A newly discovered 240-million-year-old turtle reveals that turtles and snakes are more closely related than previously thought. The “Grandfather turtle” resembled a lizard and had no shell, though it did have the makings of one, given its broad T-shaped ribs and the hard wall of bones along its belly. "Modern developmental studies indicate that the turtle shell formed from bony outgrowths of the vertebrae and ribs,” senior author Hans-Dieter Sues says. The study was published in the journal Nature. — Read it at Discovery News 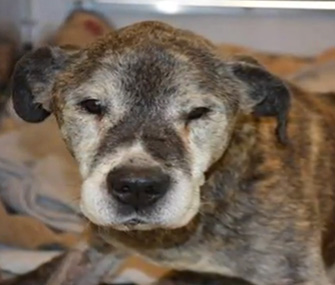 KQRE News
Grandpa the dog is now recovering in an animal shelter thanks to the help of Rachel Brosnahan, an actress in "House of Cards" and "Manhattan."

"House of Cards" cast member Rachel Brosnahan is in Santa Fe filming the second season of "Manhattan." While visiting a local dog park with her own two rescue dogs, she came across an abandoned older dog who was on the brink of heat exhaustion. “The poor guy had just been toasting out there I think,” Brosnahan said. “We brought him some water and called Animal Services.” Brosnahan said her dogs sat with the abandoned dog while they waited for help. “They both I think knew something was wrong,” she said. The dog, who shelter workers have nicknamed Grandpa, is now up and walking, and getting lots of love and attention both in person and online on the Santa Fe Animal Shelter Facebook page. “I’m so glad that they took such incredible care of him,” Brosnahan said. “Because for being as old as he was, you know, I’m not sure that all shelters would have handled the situation the same way.” — Read it at KRQE News

ASouthern Three-BandedArmadillo, named Charlie was bornat Longleat Safari & Adventure Park in the U.K. at the end of April. Charlie is only the secondarmadilloto be successfully reared at the Wiltshire park. “Charlie is doing really well and putting on lots of weight," zoo keeper Emily Randall said. "When he wasbornhe was about the size of a golf ball, and although his armor was very soft, his claws weren’t!” The rare armadillo species has suffered a thirty percent decline in population over the past decade in its native South America. It has been classified as “Near Threatened” on the International Union for Conservation of Nature Red List of Threatened Species. — Read it at Zooborns

Bubbles the Dachsund was born without her front two legs, and for months her owners, Trevor Byers and Elissa Smoak, tried to create a wheelchair for her. Finally, they purchased a 3D printer and came up with the perfect model. "She gets around in her cart better than any other small dog I have seen missing their front legs,"Byers says. The couple has an Instructables page detailing 3D-printed cart plans for other dogs in need. "My wife and I want to share what we have learned in hope that a dog won't be thrown to the curb due to this simple disability," he says. — Read it at the Huffington Post