February 18, 2015: We've scoured the Web to find the best and most compelling animal stories, videos and photos. And it's all right here. 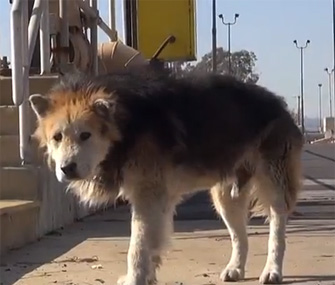 When workers at a water treatment facility in Los Angeles discovered a homeless senior dog living at the plant, they called Hope for Paws, an animal rescue organization. The rescue team rushed out to the facility, and armed with bits of hamburger, a leash and a video camera, tried to lure the dog from his dangerous location. "He just sat there, not trusting us," Hagar told The Huffington Post. "[A woman at the water treatment plant] told me that if he falls into one of the pools, the filters would just suck him in and there's nothing they can do. It was kind of tricky." They finally succeeded in their rescue attempt, and now the dog, named Mufasa, is the star of his own heartwarming rescue video that’s gone viral. While he’s currently with a foster family, he’s still looking for his forever home.— Read it and see the video at The Huffington Post

Oregon Minnow First Fish to Be Taken Off Endangered List

The Oregon chub, a a 3-inch minnow that lives in the backwaters of Oregon’s Willamette Valley, is the first fish to be removed from Endangered Species Act protection — 22 years after it was placed on the list. Paul Henson, state director for Fish and Wildlife, said the Oregon chub demonstrates that a species can be brought back from the brink of extinction if key needs are met, such as a safe place to live, even in an urban landscape. "This doesn't mean that all of a sudden it's hands off, and we never need to do anything for them," Henson said. "But we can at least put them back in the group of species that need attention, but don't need to go into the emergency room" of the Endangered Species Act. — Read it at Yahoo News 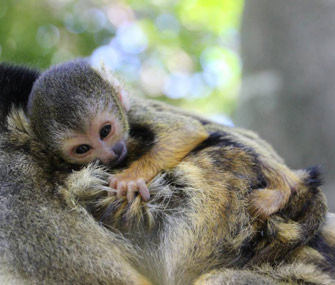 A male Squirrel Monkey born at the Taronga Zoo a few weeks ago is doing “extremely well,” according to zoo keepers. Julio is the first infant to be born after Chico, Taronga’s male, was introduced to 12 female Squirrel Monkeys from France last year, through the zoo's regional breeding program. Squirrel Monkeys are one of the smallest of the primates and are found in the wild in Central and South America, where they can live in groups of up to 500. — Read it at Zooborns

A 45-foot, 45-ton whale was spotted off the Kona coast in Hawaii on Saturday, entangled in a strong synthetic line. A Monday rescue coordinated by the Hawaiian Islands Humpback Whale National Marine Sanctuary was postponed when the whale moved to more treacherous waters, but authorities are tracking it and are looking for another opportunity to attempt to free it from the line. — Read it at The San Luis Obisbo Tribune

Toucan to Get 3D-Printed Prosthetic Beak

A Costa Rican toucan named Grecia, who was tortured by a group of kids and left for dead, is now getting a second chance at life, thanks to a fundraiser that brought in thousands of dollars to help the bird. A few 3D printing companies are working together to design and fit a suitable prosthetic to replace Grecia’s severed beak so the bird can eat on his own once again. — Read it at People Pets