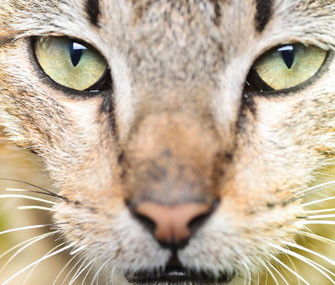 Do you ever wonder how much your pet sees, or if they see the same things with the same detail that you do? Although it seems like a relatively simple question, the answer is quite complex. When compared to human vision, dogs and cats see both better and worse… just a little differently than we do.

In general, dogs and cats are much more sensitive to light and motion than people are, but they cannot see as accurately or in the same immense color spectrum that we can.

If you have ever wondered how your dog is able to go outside in the pitch black and make his way safely around, or how your cat can move so stealthily through a dark house at 1 a.m., it is because their eyes have amazing adaptations for nighttime — or nocturnal — vision.

Pets owe these abilities to their amazing light sensitivity.Both dogs and cats can detect very low levels of light and are far superior in this capability when compared to humans. But when it comes to night vision, cats rule — even over dogs. Cats need seven times less light than people do to make their way around in the dark. Their incredible nocturnal vision first comes from the vertical shape of their pupil and their very large eyes, which allow them to take in a maximum amount of light. Next, the shiny surface at the back of their eye — called the tapetum lucidum — reflects 130 times more light than a mere human eye, which allows them to function confidently in near-black conditions! Humans don’t have a tapetum at all, but both dogs and cats do. This structure in certain animal’s eyes is what causes them to reflect and appear green or yellow when caught in a beam of light at night.

A Dog Can See It All — Almost

Maybe dogs’ upbeat personalities come from their wide-ranging view of the world around them! People are capable of seeing 180 degrees around themselves without moving their head, and cats are similar with an estimated range of 200 degrees. But compare that to the average dog, which can see an incredible 240 degrees around himself. Brachycephalic dog breeds like the Pug — which have short noses and widely spaced eyes — can see an even wider range when compared to dogs with a longer nose and more forward-facing eyes, like a Greyhound.Regardless of the breed, a dog’s ability to see the world around himself is far greater than a person’s.