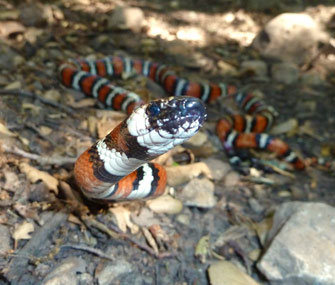 Thinkstock
If you and your dog see a snake, don't let your pup go after it. Simply walk away from it or steer your dog around it.

Fall is baby snake season, meaning there’s a greater chance that you — and your dog — will come across an adult or baby snake. Now, you don’t need to be too alarmed about this. The chances of you or your dog getting bitten by a venomous snake are relatively slim. But it’s always good to know what to do should you and your canine encounter one of these creatures. To find out more about protecting dogs from snakes, we speak to wildlife rehabilitator Caroline Seitz of Reptiles Alive.

Seitz says the best way to help keep your dog safe during baby snake season is to use common sense. Put him on a leash when you go for a walk, and if you encounter a snake or any wild animal, steer him around it. “Don’t let him go after the snake. Don’t let him bother the snake,” Seitz says.

If your dog does go after a snake, this is when verbal commands like “come” and “drop it” come in handy. And whatever you do, never put yourself at risk by getting too close to the snake. “Definitely do not touch the snake,” Seitz warns. In fact, trying to interact with or harm the snake could actually put you in more danger. “If you try to hurt a snake, you are at more risk of being bitten than if you simply walk around it or away from it.”

Of course, the worst could happen: Your dog could be bitten by a snake. Seitz says that if you suspect your dog has been bitten by a snake, take him to the veterinarian as soon as possible. You might not always see the bite occur, so you should know that signs a dog has been bitten include swelling in the area of the bite, heavy panting, as well as other abnormal symptoms and behaviors.

To help the veterinarian identify the snake, you may want to take a photo of it with your cell phone. But you should do this only if you and your dog are out of harm's way and your dog isn't in medical distress. Do not go near the snake to take the photo and don't try to take a picture if it will put you or your dog at risk.

Those who live in areas inhabited by rattlesnakes may want to discuss whether a rattlesnake vaccine is an appropriate measure to take for your dog, but even with that vaccine, a dog who's been bitten by a rattlesnake must be taken to the vet immediately.


What to Do If There Are Snakes in Your Yard

Now, suppose there are snakes in your backyard where your pup likes to play. Then what? Seitz says that for the most part, you should ignore the creatures. However, if you live in an area where venomous snakes are common, she recommends contacting a dog trainer who does snake aversion training. Simply put, snake aversion training teaches your dog to go the other way when he encounters a snake.

To deter snakes from your yard, Seitz recommends making your yard as unappealing to snakes as possible. Here’s what she says to do:

In general, Seitz says you want to be able to see all of your yard: “If you can see every inch of your yard, then snakes won’t live there. They won’t stay in a place where they can’t hide.”

So next time you and your dog see a snake, don’t panic. Hold on tight to your pup’s leash and walk away from the reptile. And maybe try to appreciate the sighting instead of fearing it. Seitz says the best way to react when you see a snake is to “be excited, be happy and be respectful.” After all, you just got to see wildlife! What could be cooler than that?