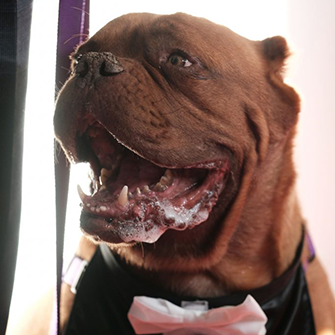 Last month, we told you about Hooch, the 3-year-old French Mastiff who was rescued from horrible abuse and went on to work with abused and special needs children. He was named the American Hero Dog of 2016 by American Humane for his bravery and forgiveness.

The star-studded awards ceremony where the award was presented airs tonight on the Hallmark Channel at 8 p.m. ET/PT and 7 p.m. Central Time.

According to American Humane: "You’ll see the amazing, funny and sometimes heartbreaking stories of eight courageous canines whose heroic exploits will touch your heart in an emotional two-hour special leading up to the moment when we reveal the name of the top American Hero Dog for 2016." — Read it at Today