Rudolph the Rescue Dog: How a Disabled Pup Changed One Woman's Life 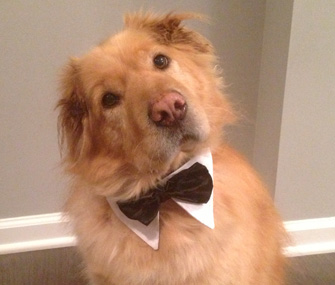 Shea Bennett used this photo of her rescue dog, Rudolph, to create a cardboard cutout of him to display at her wedding.

Seven years ago, Shea Bennett was a college student at Indiana University who just wanted to get through exams before winter break. She and her roommates took a break from studying and visited the Humane Society in Bloomington, Indiana. There, Bennett fell in love with Rudolph, a Golden Retriever-Shar-Pei mix with disabled back legs. Despite his handicap, Rudolph ran and played just like any other dog. She adopted him that day.

A lot has changed in Bennett’s life since she brought Rudolph home. She graduated from college, moved at least nine times and got married. Throughout all that, one thing has remained the same: Her love for Rudolph. He’s such an important part of her life that she even included him in her wedding in a rather creative way.

We caught up with Bennett, a 27-year-old human resources professional who lives in Houston, to hear more about her pup’s inspiring rescue story.

Q: Can you tell us the story of how you rescued Rudolph?

A: It was actually just by chance, but now I think it was meant to be. Originally I had been studying for midterms before Christmas break in college, and my roommates and I were just losing our minds studying. We thought, "What can we do to just take a break?" So we went to the Humane Society.

I saw this dog, and I thought, "Oh, he has the sweetest face, and I absolutely want to take him out and play." When I started to take him out, I noticed he had a handicap. The woman at the Humane Society was like, "Oh, he's not lame, but he can't stretch his back two legs. He just walks a little different from every other dog.” When we got outside, he brought me a stick to throw and he just had the best personality given his situation.

We went to leave and my heart was just breaking. I was like "Here's this dog. He has the greatest personality and people probably aren't adopting him because of something that really doesn't matter." So we got to the stoplight and turned around and went back and just [adopted] him. I just wanted to give him a good home. I really had a connection with him.

The sad thing is, I lived in an apartment that didn't allow pets. We had to sneak him in for the second semester. But I lived with three other girls, so, of course, he was the prized possession of the apartment. He lived a very, very pampered life that year.

Do you know anything about his life before you found him?

He had been there for three months and no one had adopted him. He was on this list that was called The 12 Strays of Christmas. It was $37 to adopt him because they wanted him to have a home and no one was willing to pay anything.

The Humane Society found him when he was about 3 months old in an abandoned fridge on the side of the road. He had made a nest out of leaves and sticks.