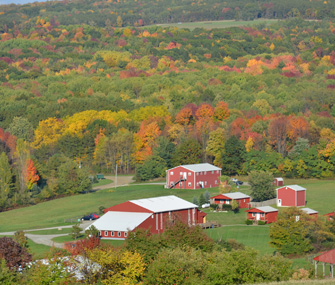 Courtesy of Farm Sanctuary
Farm Sanctuary was founded to inform the public about how farm animals are treated and why we should care more about them.

How much do you know about the farm animals providing your eggs, milk and meat? Do you know how they live or what their personalities are like? Unfortunately, many people don’t know much about the farm animals living in our country. In honor of National Farm Animals Awareness Week (September 14 to 20), we take a look at Farm Sanctuary, anorganization trying to increase awareness about such animals.

Farm Sanctuary was founded in 1986 with a mission to combat factory farming and help protect farm animals from cruelty. Its members work to inform the public about how the animals are treated and to convey an understanding of their intelligence, emotions and behavior. Farm Sanctuaryco-founder Gene Baur says that when Farm Sanctuary started, there was little awareness about the way animalsin production systemswere being treated, so the organization began to document conditions.

“We’d find living animals left for dead, so we started rescuing them,” he says.“Our shelter operations began, and we realized it was also important to educate people so that [they] could start making choices that did not support this kind of abusive system, and we continue doing that.”

Farm Sanctuary rescues animals hurt by factory farming. Factory farming refers to the practice of raising animals in high-density confinement to maximize profits, often using abusive practices and sacrificing animal welfare and the environment to reach that goal. Baur says these farms often raise thousands of animals in terrible conditions, and when an animal’s health starts to decline, the animal is often discarded. The sanctuary becomes aware of these animals a number of ways, including being contacted by people who work at the farms and neighbors who see animals being mistreated or denied basic care. Farm Sanctuary also takes in animals affected by disasters, such as floods that wash them out of barns or storms that knock barns down. Animals who get free while being transported or who are involved in car accidents and need help are also brought to the group.

Farm Sanctuary National Shelter Director Susie Coston usually goes on the animal rescues. Coston says that unless it’s just one animal, a team is typically assembled for a rescue. She is often the one to make sure animals are healthy enough for travel before they are transported to one of three sanctuaries.


Life at the Sanctuaries

Coston has worked for Farm Sanctuary for 14 years and oversees its animal sanctuaries. She spends a lot of her time at the largest, in Watkins Glen in New York, but she often travels to the other two, which are in California. According to Coston, what makes the sanctuaries unique is the individual care given to animals. Each animal’shealth issues are documented on her own chart. This personal attention is something these animals do not receive in the larger factory farm system.