Search and Rescue Dogs: The Fascinating Ways These Heroes Are Trained

“Our search and rescue dogs are usually the ones who are a little bit more independent, they tend to be very confident — willing to just go anywhere, climb on anything, not have to constantly be looking back at the handler,” Dr. Otto said. They’ll need that attitude on the job.
“We tend to let the dogs tell us where they’re going to be most successful,” she said. “Some of them tell us when they’re 8 or 10 weeks old — we’re like ‘whoa, this one is so clearly going in that direction.’ And then, some change career paths, they change majors,” she says with a laugh.

Dog in a Box 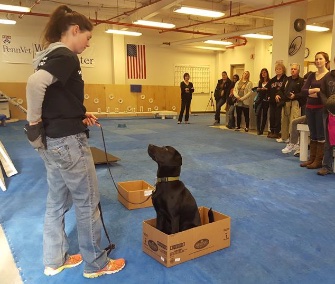 Penn Vet Working Dog Center
Climbing in and out of boxes helps the dogs learn to be aware of their back ends from a young age.

The dogs’ training works in a progression, building upon what they’ve learned. The trainers keep it fun for the puppies. Some of the concepts they need to learn aren’t things you’ve likely given a lot of thought to — and neither has the dog. Case in point: how to maneuver their back ends.

One key to teaching the dogs how to control their individual legs is a game called “dog in a box.” The dogs are encouraged to explore a cardboard box, and to try climbing into it.

“A lot of dogs will climb in it with their front feet and then they get stuck. So it’s a matter of learning that they actually can pick up their back feet, one at a time and put them in the box. When they’re in the box it’s like, ‘let’s party!’ We have good fun with that,” Dr. Otto says.

The dogs also have to be nimble to work their way through wreckage at a disaster scene, so they’re introduced to many types of surfaces to walk on. “Our puppies will have puppy agility, which means that we put all kinds of silly things on the floor — maybe metal grates, we have a kids’ plastic slide, we have some wobbly things that they step on, and we just have them walk around on that and that’s just building confidence,” Dr. Otto says.

Naturally, the ultimate game for a search and rescue dog in training is hide-and-seek, or “puppy runaways.”

“You have a puppy and you have a toy that they think is really exciting, and one person is holding the puppy and another person has the toy,” Dr. Otto explains. “They show the puppy the toy and they get the dog excited like, ‘Oh my gosh, that’s my toy!’ They run and they sort of duck behind something super easy —like maybe a barrier of some sort or a desk — and the puppy gets to watch where the person went, so they run and chase the toy and try and find where they went, and when they do, woo hoo! It’s a big party and we play.”