Home ›
Our Pet Experts ›
Mikkel Becker ›
Should I Let My Dog Bark It Out?

Should I Let My Dog Bark It Out? 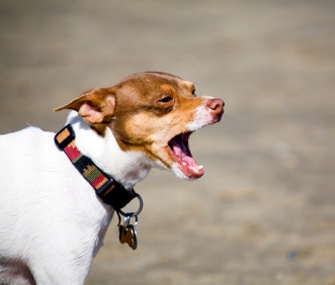 Q. My dog barks at other dogs, and I was told to just let her bark it out since she’s fearful. Will barking it out help her?

A. There is some validity to the theory of letting a dog bark it out, in that it’s a better alternative to two of the more common reactions to this behavior. The natural tendency for many pet owners when their dog starts barking at other dogs is to either use some form of punishment or to rescue their dog from the situation. A barking dog can be embarrassing for pet parents, and they may start jerking the leash and scolding the dog in order to stop the out-of-control behavior. Another common reaction, especially for small dogs, is for the pet parent to rescue her from the situation, either by picking the barking dog up or immediately turning and moving away from the other dog.

What Not to Do When Your Dog Barks

Both of these responses may increase barking, especially if your dog's behavior is fear-based. When an owner punishes a dog or tries to coerce her into silence using force, it can escalate the dog’s anxiety. Often the dog picks up on her owner’s stress and her fear is reinforced, especially if the owner is acting upset with the situation as well. Furthermore, punishment can teach a dog to associate other dogs with negative consequences if she is consistently pulled or yelled at for acting up when she sees another dog.

Although your dog's barking may be temporarily inhibited by this response, she can start to associate the presence of another dog with pain or fear. Over time, the reactive behavior may become worse, because her original fear of other dogs will be proven valid, as she learns that the presence of another dog equals negative consequences for her. She will also continue to bark because she has not been taught an alternative behavior to replace the barking. Instead of overcoming her fear, your dog may grow increasingly anxious because she has little control over a situation that often ends with a negative consequence.

Removing your dog from the situation may also increase the barking, because it teaches her that the scary thing goes away whenever she barks. Thus, your dog learns that barking is the go-to method to relieve her anxiety. Picking a small dog up can also embolden the dog to be even more forward, as she is elevated to an even higher status and size when she barks. Even if the dog was originally fearful or timid around other canines, once she learns that barking is the way to ward off the other dog, her behavior may become more offensively reactive and barky.

Keep in mind, though, that if there is any chance of injury or harm to your dog, another canine or to a person, or if your dog is too far over the edge to calm down, it is crucial that she be removed from the situation immediately. If an incident like this occurs, it’s vital that you seek help from your veterinarian or a trained behavior specialist who can help you develop a training plan to deal with this behavior.