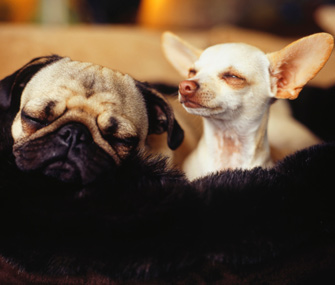 Thinkstock
Small dogs like Pugs and Chihuahuas can be a joy to live with as long as you're aware of the potential issues that they can have.

I never thought of myself as a small-dog person. When I was growing up, I much preferred my dad’s German Shepherds to my stepmom’s Toy Poodles. The first dog I acquired as an adult was a retired racing Greyhound. But although Greyhounds are wonderful apartment and condo dogs, we have stairs, and it became difficult to get Savanna up and down them after she lost a leg to bone cancer.

The next dog, we decided, would be smaller. That’s how we ended up with Cavalier King Charles Spaniels (and one Chihuahua mix). But although they are more portable, small dogs come with their own set of issues. If you are considering acquiring a small-breed dog because you think one will be easier to live with, here’s what you should know.

It Ain't Easy Being Small

Small dogs are, well, small. It’s easy to step on them, no matter how careful you try to be. It’s not so bad with the larger Toy breeds such as Pugs and Cavaliers — at least, not once they reach adult size — but smaller dogs such as Chihuahuas, Papillons and Yorkies run the risk of getting stepped on or kicked not just by the humans in the home but also by other pets. We frequently joke about attaching a balloon on a long string to the collar of our Chihuahua mix so we’ll be more likely to notice where she is.

Other pets may bully them. Lots of small dogs rule the roost, but when they have a gentle personality, their size can work against them. Esmeralda, a Papillon, was stalked by her owner’s much larger cat, who seemed to view the small, fluffy dog as a toy at best, potential dinner at worst. It was a painful dilemma for the owner, who finally ended up placing her cat in a new home to save her dog’s life.

Little dogs can hurt themselves jumping on and off furniture. It’s an especially common problem with breeds such as Italian Greyhounds, who have long, thin legs, or Japanese Chin, who often enjoy being on high places such as the back of the sofa. This is more common in young dogs, who are not only still growing but also tend to be fearless, but any small dog can suffer a broken bone if he lands the wrong way jumping off the furniture, is stepped on by an errant guest or is dropped to the floor by a child.