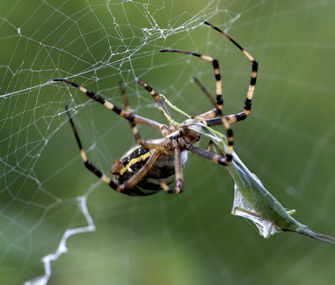 Spiders: Love them or hate them, a lot of what you think you know about them is probably not true. We talked to Rod Crawford, curator of arachnids at the Burke Museum in Seattle and creator of a website about spider myths, about some common beliefs that are wrong — or almost right — in interesting ways. Here's what we learned.

Spiders Don't Want to Get Swallowed

It's often claimed that everyone swallows some number of spiders in their sleep — four per year, eight per year, 20 in your life. But in all the years of people contacting him through his website, Crawford has never collected a single verified case. And looking at it from the spider's point of view, it's unlikely that one would ever get anywhere near a sleeping person's mouth. Although house spiders are attracted to moisture — that's why you find them in sinks and bathtubs — Crawford says, "They're not so desperate for water that they would do what for you and me would be the equivalent of crawling up to the mouth of Godzilla."

In fact, spiders have every reason to avoid a sleeping person entirely. Their eyesight can't perceive something as huge as a human. "But they do have very good instincts for avoiding an early demise," he says, "and one of those involves steering strictly clear of anything that's making gigantic vibrations."

While you sleep, your heart, pulse, breathing — and possibly snoring — all create vibrations that can be detected by spiders. "Vibrations are an immense part of the spider's sensory universe," Crawford says. "It's how they detect their prey, and it's how they detect predators and other dangers."

"Real spider bites do occasionally happen, but as far as I can tell, they've got to be really rare events," he says. "Using myself as a guinea pig, in the course of my long career, I have handled tens of thousands of live spiders with my bare hands. In the course of all that, I have received two genuine spider bites, both trivial in their effect."

Science confirms Crawford's experience. In one study, scientists studying hobo spiders in Oregon could locate only 33 cases of bites in three years. Another spider expert who did some math determined that these findings means an Oregonian is about 4,000 times more likely to be in a car crash than to be bitten by a spider. And in another study, researchers collected 2,055 brown recluse spiders from a single home in Kansas — none of whose residents were ever bitten.