Home ›
Our Pet Experts ›
Amy Sinatra Ayres ›
Study: Chimps Would Cook If They Got the Chance

Study: Chimps Would Cook If They Got the Chance 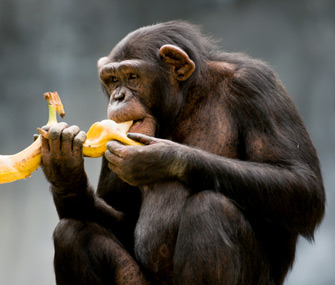 New research finds chimpanzees have the cognitive ability to cook. Scientists from Harvard and Yale found chimps have enough patience and foresight to resist eating raw food and put it in a device they thought would cook it. The chimps would give up a raw slice of sweet potato for the prospect of a cooked slice a bit later. Because they didn’t want to give the chimps real cooking devices, the researchers created a device with two plastic bowls that fit closely together, allowing them to hide pre-cooked food in the bottom. When a chimp placed a raw piece of sweet potato in the device, the researcher shook it and offered the chimp a cooked slice. The researchers said there were several indications that the chimps had the ability to take advantage of a real cooking opportunity. The study was published in the journal Proceedings of the Royal Society B. — Read it at The New York Times