Home ›
Our Pet Experts ›
Kristen Seymour ›
Survey Results: Where Should Dogs Be Allowed to Go? Readers Weigh In

Survey Results: Where Should Dogs Be Allowed to Go? Readers Weigh In 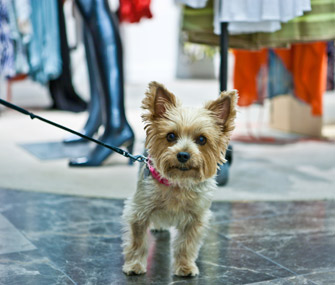 iStockphoto
When we surveyed readers on where dogs should be allowed, retail and department stores landed near the bottom of their list.

Leaving your dog behind when you head out for a day of fun or errands can be a bummer, but the fact is that many places we all go regularly just aren't dog friendly. But should they be?

We wanted to know what Vetstreet readers thought about allowing dogs— pet dogs, specifically; not service or therapy or any other type of working dog —in public places that aretraditionally off-limits to canines, so we surveyed 1,500 readers to find out. Bottom line: Many of you think dogs should be allowed to go just about anywhere all the time! But there's more to the story than just finding more dog-friendly restaurants and dog-friendly beaches. Here's the breakdown.

Where Should Dogs Be Allowed?

They also felt (albeit less strongly) that dogs should be allowed in public restrooms, the workplace, airports and on public transportation.

When it came to retail, restaurants and grocery stores though, the results were not quite as positive. Thirty-one percent answered neutrally regarding retail and department stores, with the difference between those who were for it and those who were against it being quite small — 36 percent for it and 33 percent against.

We saw a similar split when we asked about restaurants, but this time, those who were against allowing dogs in restaurants slightly outweighed those who thought they should be allowed. Thirty-nine percent of respondents said dogs shouldn't be allowed, 34 percent said they should and 27 percent answered neutrally. Several respondents took the opportunity to write in at the end of the survey though, saying that though they do think dogs should be allowed in restaurants, they feel they should remain in outdoor sections.

Other locations not on our original list that numerous readers wrote in to say should allow canines were hospitals, doctors' offices and nursing homes, as well as churches and other places of worship. A few people also suggested schools and the cabin,not cargo area, of airplanes.